Eivissa or Ibiza is one of the Balearic Islands located in the Mediterranean Sea, and belonging to Spain. With Formentera, it is one of the two Illes Pitiüses. Major cities are Ibiza Town, Santa Eulària des Riu and San Antonio.

Its official Catalan name is Eivissa; Ibiza is the Spanish name, used by everyone in the world but Catalan and Valencian speakers.

In 654 BCE Phoenician settlers founded a port in the Balearic Islands, as Ibossim, later known to Romans (as "Ebusus") for its wine, marble, and lead. The Greeks who came to Ibiza during the time of the Phoenicians were the first to call the two islands of Ibiza and Formentera the Pitiusas ("pine-covered islands").

Ibiza was a major trading post along the Mediterranean routes. Iberia began setting up its own trading stations along the nearby Balearic island of Mallorca, from which great quantities of the reknowned Balearic slingers were hired as mercenaries for the diverse wars Carthage was fighting. 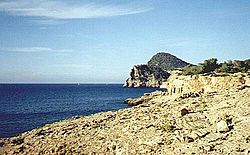 Eivissa, Cala de sa Galera, with the Puig Nunó in the background

Eivissa is a very popular tourist destination, especially due to its legendary riotous nightlife (mainly in Ibiza Town, the island's capital on the eastern shore). The most famous clubs include Privilege (the world's largest club which holds the weekly event known worldwide as Manumission on Monday nights), Es Paradis (famous for its water parties), Amnesia (famous for its foam parties and what goes on there), Space (opens at around 8AM) and Pacha. Ibiza is also famous for Café del Mar, a chill spot in Sant Antoni where many people watch the sunset every night.

There also exists a genre of trance music named for Ibiza, similarly to the way Goa trance is named for Goa, India. The style tries to reflect the atmosphere of Ibiza, with its uplifting melodies. The atmosphere is brought on with the use of synthesized string instruments, the sound of waves, mandolins and guitars, and wispy vocals.

All content from Kiddle encyclopedia articles (including the article images and facts) can be freely used under Attribution-ShareAlike license, unless stated otherwise. Cite this article:
Ibiza Facts for Kids. Kiddle Encyclopedia.