The Prodigy facts for kids 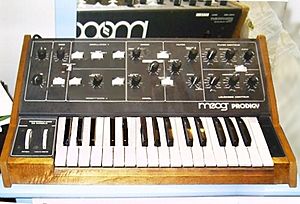 The synth that the band was named after.

The Prodigy are an English electronic dance music group formed by Liam Howlett in 1990 in Braintree, Essex. Along with Fatboy Slim, The Chemical Brothers and The Crystal Method, as well as other acts, members of the Prodigy have been said as founders of the big beat genre which achieved mainstream popularity in the 1990s and 2000s. They have sold over 25 million records worldwide. They named the band after the synthesizer, Moog Prodigy.

All content from Kiddle encyclopedia articles (including the article images and facts) can be freely used under Attribution-ShareAlike license, unless stated otherwise. Cite this article:
The Prodigy Facts for Kids. Kiddle Encyclopedia.