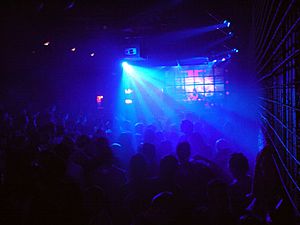 A rave is a large party or festival with disc jockeys playing electronic music. Music played at raves include house, trance, techno, drum and bass, dubstep and other forms of electronic dance music (EDM). There is a lot of dancing. Raves also have laser light shows, projected images and other visual effects used to create a fantasy-like scene. Raves mostly developed from acid house music parties in the mid-to-late 1980s in England and Ibiza. From there, it quickly spread to mainland Europe and the United States.

Raves are usually organised and promoted by event companies. Some of the early companies promoting raves in England during the 1990s were Fantazia and Helter Skelter. Another was ESP Promotions, which held a series of raves named Dreamscape. In London, there were a few large clubs that held raves on a regular basis.

All content from Kiddle encyclopedia articles (including the article images and facts) can be freely used under Attribution-ShareAlike license, unless stated otherwise. Cite this article:
Rave Facts for Kids. Kiddle Encyclopedia.