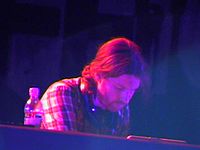 Aphex Twin (born Richard David James, 18 August 1971, in Limerick, Ireland) is an Irish-born Cornish musician. He lives and works in the UK. He is a famous electronic musician.

Aphex Twin is not his real name. His real name is Richard David James. His name is a combination of Aphex Systems Limited, a brand of audio signal processing equipment and the word Twin to remember his brother. His brother was stillborn, but given the name Richard James.

Aphex Twin was born in Limerick, Ireland. He grew up in Cornwall, U.K. He started to make music when he was a teenager. In 1991, he formed a record label called Rephlex Records.

After he became well known, he moved to London. This was so he could be in a place that was closer to other people. He however returned to Cornwall a few years later after meeting his wife. He still makes a lot of music today and uses many different pseudonyms (names). He lives in an old bank. He has bought interesting things like a tank and a submarine. 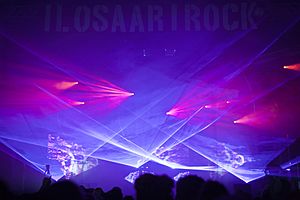 In the Universal Indicator series:

All content from Kiddle encyclopedia articles (including the article images and facts) can be freely used under Attribution-ShareAlike license, unless stated otherwise. Cite this article:
Aphex Twin Facts for Kids. Kiddle Encyclopedia.