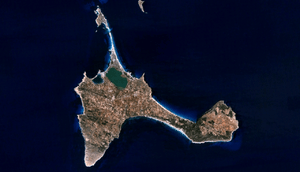 Formentera is the smallest of the 4 Balearic Islands with population.

It is located south of Ibiza (about 10 kilometers), south-west of Mallorca (about 50 kilometers). Its area is 83.24 km² (32.14 sq mi). Formentera has about 7,500 inhabitants. The island was built by volcano eruptions. It has two high areas in the east and the south and a falt area in between. Main town is Sant Francesc Xavier.

First people, who settled on Formentera, were the Carthaginians, later the Romans came there. Often the island lost its complete population, for example after the Vandals came there. In the middle ages Arabs governed the balearic island, then Catalans took over the island, Formentera became part of the new kingdom of Mallorca. Later that kingdom became a part of Spain.

The island lives mainly on tourism. Most tourists are from Germany, the United Kingdom and Italy and France. Even the other economic activities like fishing deal with tourism.

All content from Kiddle encyclopedia articles (including the article images and facts) can be freely used under Attribution-ShareAlike license, unless stated otherwise. Cite this article:
Formentera Facts for Kids. Kiddle Encyclopedia.