Wynne is the county seat and largest city of Cross County, Arkansas, United States. The population was 8,367 at the 2010 Census. Nestled between the Arkansas Delta and Crowley's Ridge, Wynne is the closest city to the second largest state park in Arkansas, Village Creek State Park. 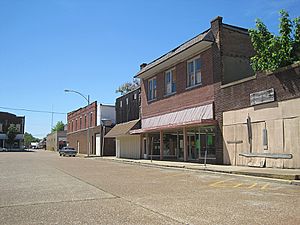 The Commercial District is one of ten sites in Wynne listed on the National Register of Historic Places.

Wynne was named for Captain Jesse Watkins Wynne. Wynne, a Texan, achieved the rank of Captain in the Civil War at the age of just 21, and he was famous for once leading a group of his captors up to the Confederate lines, where he then marched them to headquarters as his own prisoners.

In 1867, Captain Wynne moved to St. Francis County, Arkansas, and joined the finance company of Dennis & Beck. At that time, the Dennis & Beck company held savings for other companies and for individuals, but eventually, it became the Bank of Eastern Arkansas, and Wynne became its first president.

From 1880 to 1885, as the St. Louis, Iron Mountain, and Southern Railroad was under construction, active steamboat riverports like Wittsburg, at that time the county seat of Cross County, were deserted for the railroads.

The location of the settlement of Wynne was first chosen in 1882, when a train derailed, leaving one boxcar without wheels and off the tracks. That boxcar was then turned upright as a building, and as a compliment to Captain Wynne, it was designated the "Wynne Station". On September 27, 1882, the Wynne Station Post Office was opened.

When the east-west railroad line was completed, it crossed the north-south line near the boxcar, and the name "Wynne Junction" became well known in the area. On May 28, 1888, the "Junction" part of the name was dropped, and the town of Wynne was formed.

By the 1890s, the railroad traffic and the resulting activity in Wynne made it a more vibrant town than the town of Vanndale, which had been the county seat since 1886. In 1903, the county seat of Cross County was moved to Wynne.

With the advent of the U.S. Highway System in the 1920s and 30s, U.S. Route 64 was built west from Memphis, through Wynne, and to points west. Also, the north-south Arkansas Highway 1 was built through Wynne, making it an important highway crossroads for several decades, in addition to being a railroad town. Since the advent of the Interstate Highway System, Interstate 40 has largely diverted long-distance travel away from Wynne.

The town of Wynne is considered "the city with a smile" and displays this title proudly on their single overpass which is also painted in the school colors of blue and gold.

There were 3,245 households out of which 36.1% had children under the age of 18 living with them, 48.5% were married couples living together, 19.0% had a female householder with no husband present, and 28.4% were non-families. 26.2% of all households were made up of individuals and 12.6% had someone living alone who was 65 years of age or older. The average household size was 2.56 and the average family size was 3.09.

The climate in this area is characterized by hot, humid summers and generally mild to cool winters. According to the Köppen climate classification system, Wynne has a humid subtropical climate, abbreviated "Cfa" on climate maps.

All content from Kiddle encyclopedia articles (including the article images and facts) can be freely used under Attribution-ShareAlike license, unless stated otherwise. Cite this article:
Wynne, Arkansas Facts for Kids. Kiddle Encyclopedia.