Kids Encyclopedia Facts
Not to be confused with Van Buren County, Arkansas.

Van Buren ( VAN-_-BURE-ən) is the second largest city in the Fort Smith, Arkansas-Oklahoma Metropolitan Statistical Area and the county seat of Crawford County, Arkansas, United States. The city is located directly northeast of Fort Smith at the Interstate 40 - Interstate 540 junction. The city was incorporated in 1845 and as of the 2010 census had a population of 22,791, ranking it as the state's 22nd largest city, behind Searcy. 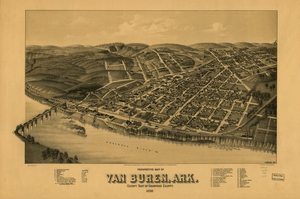 The area was settled by David Boyd and Thomas Martin in 1818. After Arkansas became a territory in 1819 Daniel and Thomas Phillips constructed a lumber yard in the community to serve as a fuel depot for traffic along the Arkansas River. In 1831 a post office was constructed for the community, at the time known as Phillips Landing. This post office was named after the newly appointed Secretary of State, Martin Van Buren.

John Drennen, along with his partner David Thompson, purchased the area for US$11,000. They moved their business of supplying firewood for steamboats to this new location on higher ground. The courthouse was constructed on a lot of land donated by Drennen on the condition that Van Buren become the county seat. The Drennen Reserve is one of the town's existing historical sites from the 1830s.

On December 28, 1862, Federal and Confederate forces clashed in and around Van Buren resulting in a defeat for Major-General T. C. Hindman, driving him south across the river with minimal casualties. Federal forces captured 100 prisoners, as stated in an official report by U.S. Major-General Samuel R. Curtis.

On April 21, 1996, at 11:12 p.m., a category F3 tornado hit the Fort Smith/Van Buren area causing extensive damage. The tornado, which spawned in Oklahoma and crossed into west Fort Smith near the confluence of the Arkansas and Poteau rivers, killed 2, injured 89 and cost $300 million in damage. The fatalities were small children from Fort Smith. At its worst, the tornado was one half mile across. After leaving the downtown area of Fort Smith, it traveled northeast through industrial and residential sections of north Fort Smith, then crossed the Arkansas River again into the Mount Vista area on the west side of Van Buren and damaged a highly residential area where no fatalities occurred, although this area was very populated at the time. The total distance it traveled on the ground was 7 miles (11 km). In total, there were around 1,800 homes damaged, the majority of which were in Van Buren.

Van Buren lies within a humid subtropical climate area. The city also lies on the eastern edge of the region known as Tornado Alley. Average temperatures range from 36°F in January, to as high an average of 81 °F in July with temperatures reaching the high 90s and low 100s in August. The average annual temperature is approximately 60 °F. Average precipitation is about 41 total inches, with only six inches being snow.

View of the Arkansas River from Meyer Park, 2013

Van Buren is home of the King Opera House, a Victorian-style performance hall from the late 19th century, part of the old downtown historic area. At the south end of the historical downtown is the Crawford County courthouse, the oldest functioning courthouse west of the Mississippi River. To the north is the Old Frisco Station which was originally a station on the St. Louis-San Francisco Railway, pictured at the top of this page.

As part of the primary Fort Smith metropolitan area, many Fort Smith based television stations including KHBS and KFSM, whose radio mast is built in Van Buren, provide local news and weather. The city's major newspaper is the Van Buren Press Argus-Courier, however many people also read Fort Smith's Southwest Times Record, as well as the Northwest Edition of the Arkansas Democrat-Gazette.

Van Buren's location at the junction of Interstate 40, Interstate 540, and the Arkansas/Oklahoma border yields surprisingly large tourism and hospitality industries. The city is also located at the junction of several state and U.S. highways including Arkansas Highway 59, US 64, and US 71. A private airport, Twin Cities Airport (code 39AR), was operational to the southeast of the city, but has been closed for many years. Modern railroads in the city include the Arkansas and Missouri Railroad and the Union Pacific Railroad. 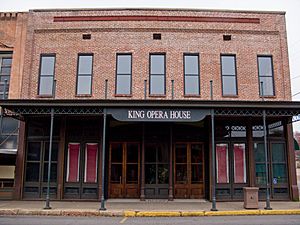 Van Buren's location at the junction of Interstate 40, Interstate 540, and the Arkansas/Oklahoma border yields surprisingly large tourism and hospitality industries. The city is also located at the junction of several state and U.S. highways including Arkansas Highway 59, US 64, and US 71. A private airport, Twin Cities Airport (code 39AR), was operational to the southeast of the city, but has been closed for many years. Modern railroads in the city include the Arkansas and Missouri Railroad and the Union Pacific Railroad.

All content from Kiddle encyclopedia articles (including the article images and facts) can be freely used under Attribution-ShareAlike license, unless stated otherwise. Cite this article:
Van Buren, Arkansas Facts for Kids. Kiddle Encyclopedia.