Kristopher Neil Allen (born June 21, 1985) is an American musician, singer and songwriter from Conway, Arkansas, and the winner of the eighth season of American Idol.

Prior to Idol, he self-released a 2007 album, Brand New Shoes.

Allen's Idol coronation song, "No Boundaries" and his version of "Heartless" both charted within the Top 20 of the Billboard Hot 100.

Allen's second major-label album Thank You Camellia was released on May 22, 2012, and the lead single "The Vision of Love" was released March 26, 2012. 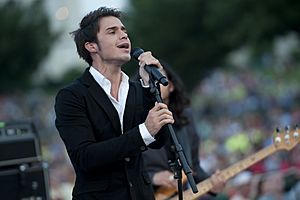 Kris Allen at the 2011 National Memorial Day Concert at the U.S. Capitol in Washington, D.C. 2011

Allen was born in Jacksonville, Arkansas, to Kimberly (née Wood) and Neil Allen. He is the elder of two sons; his younger brother, Daniel, is a college cheer-leading coach.

Allen's interest in music began very early. He began playing the viola in elementary school and went on to play the instrument in the Mills University Studies High School orchestra, eventually winning a spot in the Arkansas all-state orchestra. Additionally, he taught himself to play the guitar at age 13, and also plays the piano.

His musical influences, as stated in his Idol confessionals, include the Beatles, Jamie Cullum, Jason Mraz, Pat Monahan, John Mayer and Michael Jackson. Allen played publicly for several years before trying out for Idol, even opening for earlier Idol contestant Sean Michel on multiple occasions. He has described his decision to audition for American Idol as a "last hurrah" before giving up his pursuit of a music career. 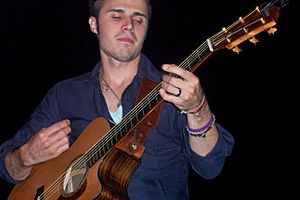 After high school, Allen moved to Conway, Arkansas, to attend the University of Central Arkansas, where he was a business major and a member of Chi Alpha campus ministries. During college, he participated in Christian missionary work around the world, including in Morocco, Mozambique, Myanmar, South Africa, Spain and Thailand. Allen also served as a worship leader for New Life Church in Conway and Little Rock, AR, as well as for the Chi Alpha campus ministry.

He dropped out of college in the middle of his junior year to pursue music professionally, performing in local bars and working as a shoe salesman to make ends meet. Allen planned to go back to college to finish his degree and "get a real job", but instead was persuaded to audition for American Idol along with his brother Daniel and his friend Cale Mills. Kris stated that "If I had not made it through in American Idol, I would have gone back to college and gotten my business degree." 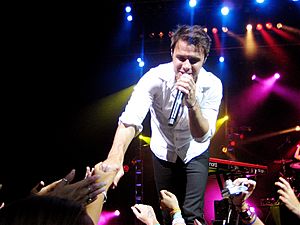 All content from Kiddle encyclopedia articles (including the article images and facts) can be freely used under Attribution-ShareAlike license, unless stated otherwise. Cite this article:
Kris Allen Facts for Kids. Kiddle Encyclopedia.