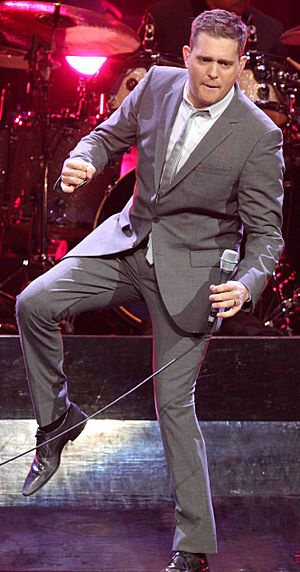 Michael Steven Bublé (born September 9, 1975) is a Canadian singer, songwriter and actor. He has won four Grammy Awards and multiple Juno Awards. His first album reached Top 10 in the United Kingdom and in Canada. His 2005 album It's Time, and his 2007 album Call Me Irresponsible were very successful around the world, reaching number one on the Canadian album chart, the U.S. Billboard 200 chart, the Australian ARIA Albums Chart, and the European charts. Bublé has sold thirty million albums worldwide.

Bublé was born in Burnaby, British Columbia in September 1975. His father is Lewis Bublé, a salmon fisherman. His mother is Amber (née Santagà).

From his earliest years, Bublé wanted to be a singer. He took an interest in jazz about the age of five.

As a boy, he had a great interest in hockey. He shared his interest with his father and grandfather. He played hockey but realized he was not good enough to be a professional player.

At the age of 14, he began working with his father on a fishing boat. Sometimes they would be away from home two or three months at a time. Bublé credits the hard work on the boat with making him a man.

At age 16, Bublé began singing in nightclubs. He credits his Italian maternal grandfather with these opportunites. His grandfather traded his ability as a plumber for the chance to have his grandson appear on stage.

Bublé married Luisana Lopilato in March 2011 in Buenos Aires. Bublé co-wrote the hit single "Haven't Met You Yet" for Lopilato while they were dating and she appeared in his music video. The couple have two sons: Noah (born August 2013) and Elias (born January 2016). They also have one daughter, Vida (born July 2018).

All content from Kiddle encyclopedia articles (including the article images and facts) can be freely used under Attribution-ShareAlike license, unless stated otherwise. Cite this article:
Michael Bublé Facts for Kids. Kiddle Encyclopedia.