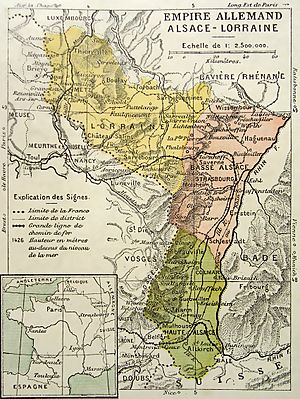 The Imperial Territory of Alsace-Lorraine (German: Reichsland Elsaß-Lothringen or Elsass-Lothringen, French: Terre d'Empire d'Alsace-Lorraine or Alsace-Moselle) was a territory created by the German Empire in 1871 after its victory in the Franco-Prussian War. It was made up of almost all of the French region of Alsace and about a quarter of Lorraine, hence its name. France took it back in 1918 and it became part of that country as a result of Treaty of Versailles in 1919. Nazi Germany de facto took it back in 1940 but France took it back in 1945.

The territory has been part of France since then. In 2016 it became part of the Region of Grand Est.

All content from Kiddle encyclopedia articles (including the article images and facts) can be freely used under Attribution-ShareAlike license, unless stated otherwise. Cite this article:
Alsace-Lorraine Facts for Kids. Kiddle Encyclopedia.