Judsonia is a city in White County, Arkansas, United States. Rickey Veach is the current mayor. The population was 2,019 at the 2010 census.

There were 733 households out of which 29.9% had children under the age of 18 living with them, 56.8% were married couples living together, 10.9% had a female householder with no husband present, and 27.7% were non-families. 25.2% of all households were made up of individuals and 12.7% had someone living alone who was 65 years of age or older. The average household size was 2.48 and the average family size was 2.94. 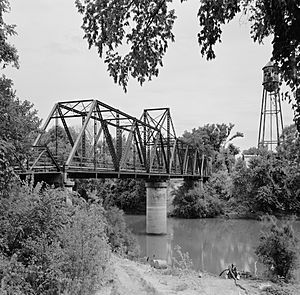 Originally known as Prospect Bluff, the town was founded in 1840 by Erastus Gregory. In 1871 a Baptist school, Judson University, was established in the area. A few months later the name Prospect Bluff was changed to Judsonia, after Baptist missionary Adoniram Judson, to help promote the school, which drew many northerners to the area.

On the evening of March 21, 1952, tornadoes swept Arkansas leaving 111 dead. Fifty of those fatalities were in Judsonia and the near vicinity. It was reported that the only building in the town not damaged was the Methodist church, which stands today in the city's downtown area along Van Buren Street.

"That's Judsonia" by William Ewing Orr (1957, White County Printing Company) is a history of the community. Judsonia is home to a yearly festival called Prospect Bluff Days in honor of the towns origins.

All content from Kiddle encyclopedia articles (including the article images and facts) can be freely used under Attribution-ShareAlike license, unless stated otherwise. Cite this article:
Judsonia, Arkansas Facts for Kids. Kiddle Encyclopedia.