Greenland is a city in Washington County, Arkansas, United States. The community is located in the Boston Mountains, deep in the Ozark Mountains. Early settlers found prosperity by growing fruit, including apples and a variety of berries, and raising chickens. The completion of the St. Louis–San Francisco Railway through the mountains in 1882 further grew the local economy, leading Greenland to incorporate in 1910. Located immediately south of Fayetteville in the Northwest Arkansas metropolitan statistical area, Greenland has been experiencing a population boom in recent years, as indicated by a 39% growth in population between the 2000 and 2010 censuses.

There were 335 households, out of which 38.8% had children under the age of 18 living with them, 61.2% were married couples living together, 18.2% had a female householder with no husband present, and 22.4% were non-families. 19.1% of all households were made up of individuals, and 7.5% had someone living alone who was 65 years of age or older. The average household size was 2.71 and the average family size was 3.08. In the city, 61% were indicated to have received a high school diploma, 9% to have received a bachelor's degree, almost exclusively from U of A. 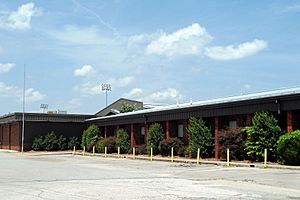 The climate in this area is characterized by hot, humid summers and generally cool to very cold winters. According to the Köppen Climate Classification system, Greenland has a humid subtropical climate, abbreviated "Cfa" on climate maps. 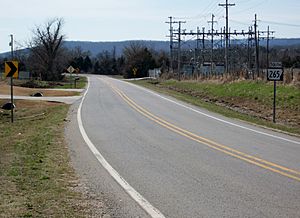 Located south of Fayetteville, the city is served by Interstate 49 (I-49) along the western edge and by US Highway 71 (US 71) through central Greenland. Together, these routes form the Boston Mountains Scenic Loop, one of eleven scenic byways in the state. Highway 265 runs in extreme western Greenland as the Butterfield Overland Mail Arkansas Heritage Trail.

Drake Field, owned and operated by the City of Fayetteville, is located north of Greenland. Formerly Northwest Arkansas's primary aviation facility until the construction of Northwest Arkansas Regional Airport, Drake Field provides general aviation service to the residents, businesses and organization around the area. The facility saw 35,267 operations in 2009.

All content from Kiddle encyclopedia articles (including the article images and facts) can be freely used under Attribution-ShareAlike license, unless stated otherwise. Cite this article:
Greenland, Arkansas Facts for Kids. Kiddle Encyclopedia.