Farmington is a city in Washington County, Arkansas, United States. The community is nestled in a valley among the Boston Mountains, a subset of the Ozark Mountains. Although the first settlers came from the Deep South in 1828, the community did not incorporate until 1946. Located immediately west of Fayetteville in the Northwest Arkansas metropolitan statistical area, Farmington has been experiencing a population boom in recent years, as indicated by a 66% growth in population between the 2000 and 2010 censuses. It has been characterized as a bedroom community by the University of Arkansas Community Design Center.

The first settlers came from the Deep South in 1828, and the area was known as Engel's Mill until a post office was built in 1868 and the village was renamed. The Civil War was rough on the community, as many residents were Confederate sympathizers despite most of northwest Arkansas supporting the Union. The Battle of Prairie Grove occurred not far from Farmington, and the city was subject to raids by both armies as well as unaffiliated guerrillas and roughnecks.

Around the 1890s, residents found prosperity by growing strawberries and grapes and shipping them on the St. Louis–San Francisco Railway. The tracks were pulled up during World War II, something the company had wanted to do for years, under the guise of the war effort. Farmington was incorporated on October 15, 1946.

According to the United States Census Bureau, the city has a total area of 4.8 square miles (12 km2), all of it land.

Farmington borders Fayetteville to the west and sections of Fayetteville along Highway 16 are north of the city. 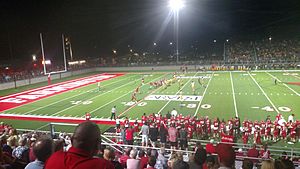 Farmington School District provides elementary and secondary education to area students. Farmington's mascot is the cardinal and their team colors are scarlet red and white.

All content from Kiddle encyclopedia articles (including the article images and facts) can be freely used under Attribution-ShareAlike license, unless stated otherwise. Cite this article:
Farmington, Arkansas Facts for Kids. Kiddle Encyclopedia.