Kids Encyclopedia Facts
Not to be confused with Crawford, Kansas.

Crawford County (county code CR) is a county located in Southeast Kansas. As of the 2020 census, the county population was 38,972. Its county seat is Girard, and its most populous city is Pittsburg. The county was named in honor of Samuel J. Crawford, Governor of Kansas.

Located in the Osage Cuestas and Cherokee Lowlands, it lies halfway between Kansas City, Missouri and Tulsa, Oklahoma. Crawford County, and much of southeast Kansas, was founded on coal mining, the Pittsburg-Weir Coalfield being located here, and is still known for mining today. Pittsburg State University is located in Crawford County.

In 1854, the Kansas Territory was organized, then in 1861 Kansas became the 34th U.S. state. In 1867, Crawford County was established. It is named for Samuel J. Crawford, who was the governor in office at the time of the county's establishment.

On Sunday, May 4, 2003, a strong and violent F4 tornado touched down in western Crawford County, several miles west of Frontenac at around 4:40 p.m. The tornado remained on the ground throughout Crawford County until it entered neighboring Barton County, Missouri—traveling a total of 35 miles (56 km) and ending near Liberal, Missouri. The towns of Ringo, Franklin, and Mulberry, all in Crawford County, were devastated. The tornado cut a path of destruction roughly one quarter mile wide. Several F4 and F5 tornadoes hit Kansas, Missouri, and several other states that day, including the Kansas City metropolitan area. Six deaths were reported in Kansas, and Governor Sebelius declared much of eastern and southeastern Kansas a disaster area, including Crawford County. 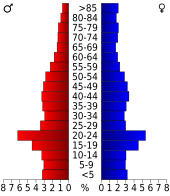 The Pittsburg Micropolitan Statistical Area includes all of Crawford County. 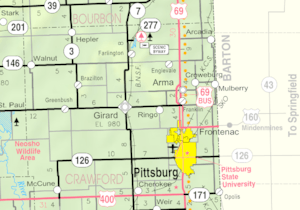 Crawford County is divided into nine townships. The cities of Frontenac, Girard, Mulberry, and Pittsburg are considered governmentally independent and are excluded from the census figures for the townships. In the following table, the population center is the largest city (or cities) included in that township's population total, if it is of a significant size.

All content from Kiddle encyclopedia articles (including the article images and facts) can be freely used under Attribution-ShareAlike license, unless stated otherwise. Cite this article:
Crawford County, Kansas Facts for Kids. Kiddle Encyclopedia.