Girard is a city in and the county seat of Crawford County, Kansas, United States. As of the 2010 census, the city population was 2,789. 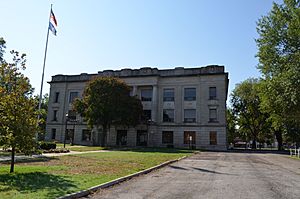 Girard was founded in the spring of 1868, in opposition to Crawfordsville, and named after the town of Girard, Pennsylvania, the former home of trustee Charles Strong. It was based around the surveyed line of the Kansas City, Fort Scott and Gulf Railroad, in an attempt to gain an advantage over its rival.

The first post office in Girard was established in September, 1868.

The first celebration in Girard occurred on July 4, 1868. It was a Sunday school celebration and a celebration of the nation's natal day, both in one. Under a law passed in March, 1871, Girard became a city of the third class, and in the early part of April elected her first city officers. The last meeting of the trustees was held April 5, and the first meeting of the new Council was held on the 7th.

The Girard Mills were built in 1870, and began operations in the spring of 1871. The first building was a 2+1⁄2-story frame, costing, with the machinery and power, $10,000. The property was owned by Tontz & Hitz. In 1879, Tontz retired from active participation in the management of the business, and in 1882 sold his interest to Hitz who thereupon erected a 3+1⁄2-story brick mill, put in five run of buhrs, and two sets of Gray's patent rollers, thus making it a combined mill.

The Crawford County Mills were built in 1870 by a stock company. These mills are two and a half stories high, contain three run of buhrs and one set of rollers, thus being also a combined mill, and the machinery is propelled by a twenty-five horse-power engine.

Carbon Creek was the location of the first mining camp of the county. No shafts were sunk at first, but several strip pits were opened, and from the strip pits slopes were run along the veins, and coal operations opened on a small scale. By 1877 perhaps one hundred miners were working along Carbon creek, getting out coal.

In the 1960s many of the mines closed. Today the landscape of southeastern Crawford County is covered with long strip mines now full of water and serving as fishing lakes & unfarmed wildlife habitat. The ruins of abandoned zinc & lead smelters can also be seen. Many of them being Superfund sites polluted with the toxic remains of smelter operations. The economy that was driven by industrialized mining & smelting during the first half of the 20th century has now (2007) largely reverted to an agricultural basis.

The Girard Public Library has several record books and other resources pertaining to mining operations in Southeast Kansas.

With the growth of the mining industry in Crawford County, large numbers of immigrants from Southern Europe and the Balkans were brought in to work in the mines. These immigrants were more often adherents of Catholicism in contrast to the generally Protestant population previously in the county. At the time this created social tension but today Crawford county celebrates its South European heritage with the annual "Little Balkan Days" event.

To dig the coal, the city began a concentrated effort to attract coal miners from other areas of the United States and from the coal producing nations of Europe. Overseas, broadsides were distributed along the Mediterranean, promising prosperity in the coal fields of southeast Kansas. Steamship companies sent agents throughout Europe to enlist workers, underwriting one-way passage. From 1880 through 1915 huge waves of immigrants came to southeast Kansas. In all, over fifty nationalities came to mine coal and work in the area's smelters and other industries.

In the first decades of the 20th century Girard became a hub of socialist politics. Populist Percy Daniels, whose farm was nearby in Crawford Township, briefly owned the Girard Herald and used it to promote his views; he was elected lieutenant governor in 1892. In 1896 Julius Wayland moved to Girard from Kansas City, Missouri and brought with him his socialist periodical Appeal to Reason. In 1900 he employed Fred Warren as his co-editor. Warren was a well-known figure on the left and managed to persuade some of America's leading progressives to contribute to the Appeal to Reason. In 1904 Warren commissioned Upton Sinclair to write a novel about immigrant workers in the Chicago meat packing houses. Wayland provided Sinclair with a $500 advance and after seven weeks research he wrote the novel, The Jungle. Serialized in 1905, the book helped to increase circulation to 175,000. When published by Doubleday in 1906, As the popularity of the Appeal to Reason increased, so did the attacks on Wayland and Warren. The phenomenal success of Wayland's newspaper meant that Girard came to have a printing plant capable of handling a weekly newspaper of huge circulation; on occasion over 400,000 copies per week. It also meant that Girard appeared in the imprint of many radical books and pamphlets, for the Appeal to Reason Company issued hundreds of other socialist publications in addition to the Appeal.

During the decade of the 1900s Eugene V. Debs lived in Girard and worked on the Appeal to Reason. He was the Social Democratic Party candidate for President of the United States in the election of 1900. He ran for President again on the Socialist Party of America ticket in 1904, 1908, and 1912. Debs received 901,000 votes in the election of 1912 (6% of the vote). In 1908 he kicked-off his campaign for president from the steps of the Crawford county courthouse in Girard. In 1912 he carried Crawford County (one of four counties he carried nationwide). During World War I Debs was a subject of efforts by President Wilson to suppress dissent against the war. He was convicted of violating the Smith Espionage Act and, in September 1918, was sentenced to 10 years in prison. In 1920 he ran for President while still incarcerated in the Atlanta Penitentiary. He received 919,799 votes (3.4% of the vote) despite his imprisonment. President Warren G. Harding pardoned Debs in December, 1921.

In 1915 Emanuel Julius was invited to move to Girard and write for Appeal to Reason, then the largest socialist periodical in the country. Julius married Marcet Haldeman in 1916 and, at the suggestion of Marcet's aunt, Jane Addams of Hull House, both assumed the surname Haldeman-Julius. In 1919, Emanuel became co-owner and editor of Appeal to Reason and began printing in Girard the first of the small paperback books which soon became the foundation for his Little Blue Books series. His vision was to make good literature available to the masses at a cheap price. At the end of nine years the small project had become a gigantic publishing venture; Emanuel Haldeman-Julius became known as "the Henry Ford of literature". Following World War II, the FBI under J. Edgar Hoover viewed the Little Blue Books' inclusion of such subjects as socialism, atheism, and frank treatment of sexuality as a threat and put Haldeman-Julius on their enemies list. This caused a rapid decline in the number of bookstores carrying the Little Blue Books.

Emanuel Haldeman-Julius died July 31, 1951 at his home in Girard. He was found drowned in his own swimming pool by his second wife of nine years, Sue Haldeman-Julius. The Little Blue Books continued to be reprinted after Haldeman-Julius' death and were sold by mail order by his son until the Girard printing plant and warehouse was destroyed by fire in 1978.

In May 2003, four people were killed and over a dozen injured by the biggest tornado in Crawford County in recent memory. At least ten lives were lost in southeast Kansas and southwest Missouri. The Girard tornado was first rated as an F4, but is a strong canditate for an upgrade to F5 status. The tornado touched down at 4;40pm near McCune in western Crawford County, cutting a path almost half a mile wide. It traveled by the outskirts of Girard the small community of Ringo, into Franklyn, and then by the outer reaches of Mulberry.

This city is located on a gently undulating prairie at the center of the county. It is regularly laid out, has a public square in the center.

The climate in this area is characterized by hot, humid summers and generally mild to cool winters. According to the Köppen Climate Classification system, Girard has a humid subtropical climate, abbreviated "Cfa" on climate maps. 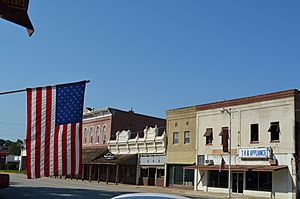 There were 1,080 households of which 31.6% had children under the age of 18 living with them, 48.4% were married couples living together, 13.2% had a female householder with no husband present, 4.1% had a male householder with no wife present, and 34.3% were non-families. 29.5% of all households were made up of individuals and 14.4% had someone living alone who was 65 years of age or older. The average household size was 2.43 and the average family size was 2.97.

There were 1,063 households out of which 32.4% had children under the age of 18 living with them, 53.2% were married couples living together, 11.4% had a female householder with no husband present, and 31.9% were non-families. 28.2% of all households were made up of individuals and 16.7% had someone living alone who was 65 years of age or older. The average household size was 2.42 and the average family size was 2.95.

All content from Kiddle encyclopedia articles (including the article images and facts) can be freely used under Attribution-ShareAlike license, unless stated otherwise. Cite this article:
Girard, Kansas Facts for Kids. Kiddle Encyclopedia.