Montgomery County (county code MG) is a county located in the U.S. state of Kansas. As of the 2010 census, the county population was 35,471. Its county seat is Independence, and its most populous city is Coffeyville.

In 1854, the Kansas Territory was organized, then in 1861 Kansas became the 34th U.S. state. Montgomery County was established on February 26, 1867. It was named in honor of Richard Montgomery, an American Revolutionary War general killed in 1775 while attempting to capture Quebec City, in Canada, after successfully capturing two forts and the city of Montreal.

For a brief time, the Osages attempted to maintain a boundary at the Verdigris River. The Verdigris flows from north to south through the center of Montgomery County. From the west the Elk River joins the Verdigris at a confluence slightly northwest of the geographical center of the county. In 1867 Frank and Fred Bunker established a primitive cattle camp on the west side of the Verdigris south of the confluence. Like the Osages, the Bunkers thought they were beyond the boundaries of civilization.

Early in 1869, however, settlers began to cross the Verdigris River, "at first under protest of the Indians, but the immense throng of settlers soon made all protests futile." Montgomery County was surveyed and organized in 1869; the governor appointed commissioners June 3.

According to the U.S. Census Bureau, the county has a total area of 651 square miles (1,690 km2), of which 644 square miles (1,670 km2) is land and 8.0 square miles (21 km2) (1.2%) is water. The lowest point in the state of Kansas is located on the Verdigris River in Cherokee Township in Montgomery County (just southeast of Coffeyville), where it flows out of Kansas and into Oklahoma. 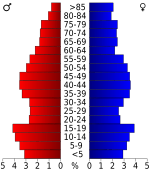 The Coffeyville Micropolitan Statistical Area includes all of Montgomery County. 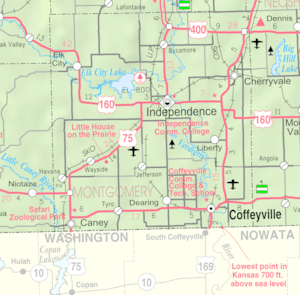 Montgomery County is divided into twelve townships. The cities of Caney, Cherryvale, Coffeyville, and Independence are considered governmentally independent and are excluded from the census figures for the townships. In the following table, the population center is the largest city (or cities) included in that township's population total, if it is of a significant size.

All content from Kiddle encyclopedia articles (including the article images and facts) can be freely used under Attribution-ShareAlike license, unless stated otherwise. Cite this article:
Montgomery County, Kansas Facts for Kids. Kiddle Encyclopedia.