Junction City is a city and county seat of Geary County, Kansas, United States. As of the 2010 census, the city population was 23,353. Fort Riley, a major U.S. Army post, is nearby. 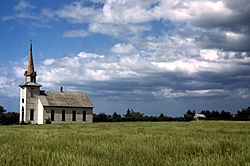 Junction City is so named from its position at the confluence of the Smoky Hill and Republican rivers.

In 1854, Andrew J. Mead of New York of the Cincinnati-Manhattan Company, Free Staters connected to the Massachusetts Emigrant Aid Company planned a community there called Manhattan (there was also a discussion to call it New Cincinnati). When the steamship Hartford delivering the immigrants could not reach the community because of low water on the Kansas River, the Free Staters settled 20 miles West in what today is Manhattan, Kansas. The community was renamed Millard City for Captain Millard of the Hartford on October 3, 1855. It was renamed briefly Humboldt in 1857 by local farmers and renamed again later that year to Junction City. It was formally incorporated in 1859.

In 1923, John R. Brinkley established Radio Station KFKB (which stood for ‘’Kansas First, Kansas Best’’) using a 1 kW transmitter. It is one of the first—if not the very first—radio stations in Kansas.

Among its residents is film director Kevin Wilmott whose movies including Ninth Street are set in Junction City. Ninth Street specifically refers to a bawdy area of the community that was frequented by Fort Riley soldiers in the 1960s. In the 1980s a major initiative was undertaken to clean up the Ninth St. area.

Timothy McVeigh rented the Ryder truck he used in the Oklahoma City bombing from an auto body shop in Junction City.

The area receives over 32 inches (810 mm) of precipitation during an average year with the largest share being received during May, June, and July—with a combined 29 days of measurable precipitation. During a typical year the total amount of precipitation may be anywhere from 23 to 43 inches (1,100 mm). There are on average 86 days of measurable precipitation per year. Winter snowfall averages less than 14 inches (360 mm), but the median is just over 7 inches (180 mm). Measurable snowfall occurs an average of 6 days per year with at least an inch of snow being received on four of those days. Snow depth of at least an inch occurs an average of 17 days per year.

There were 9,134 households of which 39.6% had children under the age of 18 living with them, 45.9% were married couples living together, 16.4% had a female householder with no husband present, 4.6% had a male householder with no wife present, and 33.1% were non-families. 27.6% of all households were made up of individuals and 7% had someone living alone who was 65 years of age or older. The average household size was 2.53 and the average family size was 3.07.

There were 7,492 households out of which 35.7% had children under the age of 18 living with them, 49.8% were married couples living together, 14.6% had a female householder with no husband present, and 32.2% were non-families. 26.4% of all households were made up of individuals and 9.1% had someone living alone who was 65 years of age or older. The average household size was 2.49 and the average family size was 3.00.

In recent years, the city has been experiencing a major growth due to the return of the 1st Infantry Division to Fort Riley. Several thousand housing units are currently under construction or completed within numerous new subdivisions. The construction of new homes had slowed in 2008, but has become brisk once again with the Army's prediction of a shortfall of 1,200 family housing units in the region. This shortfall is for married soldiers only and does not include civilian support staff, or the doctors, nurses, and staff of the new $450,000,000 hospital that is currently under construction on post.

In Sidney Sheldon's New York Times bestseller Windmills of the Gods, the heroine of the novel is from Junction City. In both the stage and film version of Hedwig and the Angry Inch, the character of Hedwig moves to Junction City after leaving East Germany.

All content from Kiddle encyclopedia articles (including the article images and facts) can be freely used under Attribution-ShareAlike license, unless stated otherwise. Cite this article:
Junction City, Kansas Facts for Kids. Kiddle Encyclopedia.