Geary County (county code GE) is a county located in the U.S. state of Kansas. As of the 2010 census, the county population was 34,362. Its county seat and most populous city is Junction City. The county is named in honor of Governor John W. Geary.

In 1854, the Kansas Territory was organized, then in 1861 Kansas became the 34th U.S. state. Geary County was formed on August 30, 1855 as an original county from open, free territory. It was among the first 33 counties established by the territory government.

Geary County was originally named Davis County in 1855 after Jefferson Davis. In 1862 and 1864 after Davis became president of the confederacy, attempts were made to change the county's name, but both failed. Federal census records show it as Davis County from 1860 through 1880, in addition to the 1885 Kansas State census. In 1888 the county was renamed in honor of John W. Geary, an early Governor of the Kansas Territory. 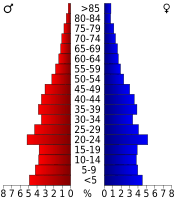 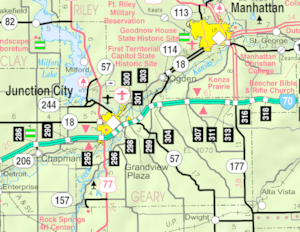 Located north of the junction of the Smoky Hill and Republican rivers, the Fort Riley Military Reservation covers 100,656 acres (407 km2) in Geary and Riley counties. The fort has a daytime population of nearly 25,000 and includes one census-designated place:

Geary County is divided into eight townships. The city of Junction City is considered governmentally independent and is excluded from the census figures for the townships. In the following table, the population center is the largest city (or cities) included in that township's population total, if it is of a significant size.

All content from Kiddle encyclopedia articles (including the article images and facts) can be freely used under Attribution-ShareAlike license, unless stated otherwise. Cite this article:
Geary County, Kansas Facts for Kids. Kiddle Encyclopedia.