Clay County (county code CY) is a county located in the U.S. state of Kansas. As of the 2010 census, the county population was 8,535. Its county seat and most populous city is Clay Center.

When the first counties were created by the Kansas legislature in 1855, the territory within the present limits of the county was attached to Riley County for all revenue and judicial purposes. Subsequently, Clay was attached to Geary County. In 1857, Clay was created and named in honor of the famous American statesman Henry Clay, a member of the United States Senate from Kentucky and United States Secretary of State in the 19th century.

In 1887, the Atchison, Topeka and Santa Fe Railway built a branch line from Neva (3 miles west of Strong City) to Superior, Nebraska. This branch line connected Strong City, Neva, Rockland, Diamond Springs, Burdick, Lost Springs, Jacobs, Hope, Navarre, Enterprise, Abilene, Talmage, Manchester, Longford, Oak Hill, Miltonvale, Aurora, Huscher, Concordia, Kackley, Courtland, Webber, Superior. At some point, the line from Neva to Lost Springs was pulled but the right of way has not been abandoned. This branch line was originally called "Strong City and Superior line" but later the name was shortened to the "Strong City line". In 1996, the Atchison, Topeka and Santa Fe Railway merged with Burlington Northern Railroad and renamed to the current BNSF Railway. Most locals still refer to this railroad as the "Santa Fe".

In 2010, the Keystone-Cushing Pipeline (Phase II) was constructed north to south through Clay County, with much controversy over tax exemption and environmental concerns (if a leak ever occurs). A pumping station named Riley was built along the pipeline. 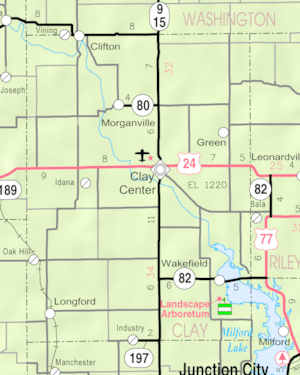 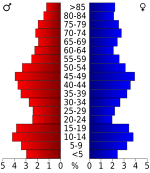 Clay County is divided into eighteen townships. The city of Clay Center is considered governmentally independent and is excluded from the census figures for the townships. In the following table, the population center is the largest city (or cities) included in that township's population total, if it is of a significant size.

All content from Kiddle encyclopedia articles (including the article images and facts) can be freely used under Attribution-ShareAlike license, unless stated otherwise. Cite this article:
Clay County, Kansas Facts for Kids. Kiddle Encyclopedia.