Riley County (standard abbreviation: RL) is a county located in the U.S. state of Kansas. As of the 2010 census, the population was 71,115. The largest city and county seat is Manhattan.

Riley County, named for Mexican-American War general Bennet Riley, was on the western edge of the 33 original counties established by the Kansas Territorial Legislature in August 1855. For organizational purposes, Riley County initially had attached to it Geary County and all land west of Riley County, across Kansas Territory into present-day Colorado.

Manhattan was selected as county seat in contentious fashion. In late 1857, an election was held to select the county seat, with Ogden prevailing. However, Manhattanites suspected election fraud, and were eventually able to prove that a number of votes were illegally cast. Sheriff David A. Butterfield was forced to secure the county's books and records for Manhattan, and Manhattan was finally officially declared the county seat in 1858.

The eastern border of the county follows the former course of the Big Blue River. The river was dammed in the 1960s and Tuttle Creek Lake was created as a result. The county falls within the Flint Hills region of the state. 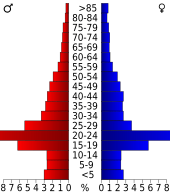 Riley County is part of the Manhattan, KS Metropolitan Statistical Area. Millennials (ages 15-34 years old) make up 53.6% of the population of Riley County, one of the highest rates in the United States.

Millennials (ages 15-34 years old) make up 53.6% of the population of Riley County, one of the highest rates in the United States. 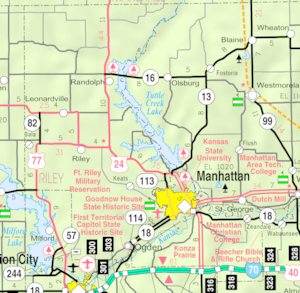 These former places were flooded when Tuttle Creek Lake was created in the 1950s and 1960s. Randolph was also flooded, but moved a mile west of its original location.

Located north of the junction of the Smoky Hill and Republican rivers in Geary County, Fort Riley Military Reservation covers 100,656 acres (407 km2) in Geary and Riley counties. The fort has a daytime population of nearly 25,000 and includes a census-designated place: 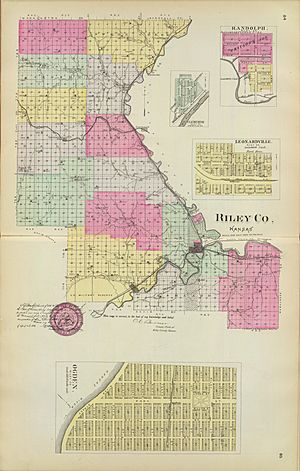 Riley County is divided into fourteen townships. The city of Manhattan is considered governmentally independent and is excluded from the census figures for the townships. In the following table, the population center is the largest city (or cities) included in that township's population total, if it is of a significant size.

All content from Kiddle encyclopedia articles (including the article images and facts) can be freely used under Attribution-ShareAlike license, unless stated otherwise. Cite this article:
Riley County, Kansas Facts for Kids. Kiddle Encyclopedia.