Marshall County (standard abbreviation: MS) is a county located in the U.S. state of Kansas. As of the 2010 census, the county population was 10,117. The largest city and county seat is Marysville.

The Oregon Trail crosses Marshall County. The Infamous Donner Reed Party rested along the banks of the Big Blue river and lost one of its members, Sarah Keyes, who is still buried at Alcove Springs (located outside of Marysville). Many documented pioneer bodies are buried surrounding Alcove Spring.

In 1849 Francis James Marshall, from Weston, Missouri, came to Marshall County and established a ferry service on the Big Blue River at "Independence Crossing." A few years later Francis Marshall decided to stay on in Marshall County and make it his home. He moved his Ferry business to an upper crossing now known as Marysville (the city is named after Marshall's own wife Mary).

On May 30, 1879, the "Irving, Kansas Tornado" passed through Marshall county. This tornado measured F4 on the Fujita scale and had a damage path 800 yards (730 m) wide and 100 miles (160 km) long. Eighteen people were killed and sixty were injured.

The Marshall County Historical Society resides in the county's historic courthouse. Which is now a Museum and Research Library. The building is grand and beautiful. 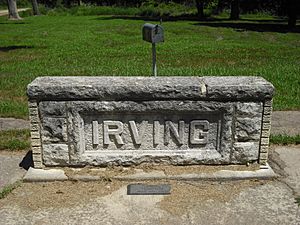 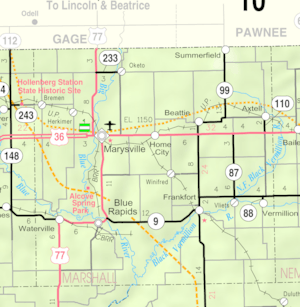 Marshall County is divided into twenty-five townships. The city of Marysville is considered governmentally independent and is excluded from the census figures for the townships. In the following table, the population center is the largest city (or cities) included in that township's population total, if it is of a significant size.

All content from Kiddle encyclopedia articles (including the article images and facts) can be freely used under Attribution-ShareAlike license, unless stated otherwise. Cite this article:
Marshall County, Kansas Facts for Kids. Kiddle Encyclopedia.