Nemaha County (standard abbreviation: NM) is a county located in the northeastern part of the U.S. state of Kansas. As of the 2010 census, the county population was 10,178. The county seat is Seneca.

The first railroad in Nemaha County was built in 1866.

On May 30, 1879, the "Irving, Kansas Tornado" passed through Nemaha county. This tornado measured F4 on the Fujita scale, and had a damage path 800 yards (730 m) wide and 100 miles (160 km) long. Eighteen people were killed and sixty were injured in this tornado. 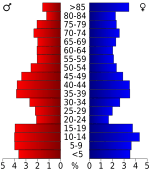 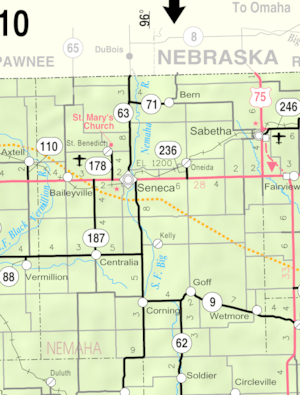 Nemaha County is divided into twenty townships. The cities of Sabetha and Seneca are considered governmentally independent and are excluded from the census figures for the townships. In the following table, the population center is the largest city (or cities) included in that township's population total, if it is of a significant size.

All content from Kiddle encyclopedia articles (including the article images and facts) can be freely used under Attribution-ShareAlike license, unless stated otherwise. Cite this article:
Nemaha County, Kansas Facts for Kids. Kiddle Encyclopedia.