Blue Rapids is a city in Marshall County, Kansas, United States. As of the 2010 census, the city population was 1,019. 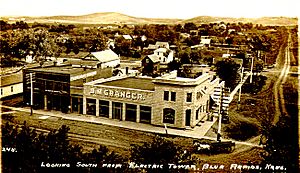 Looking south from the public square c. 1900. The Arlington House and Granger Store are in the foreground. Capital Bluff, the highest point in this part of the county, can be seen in the background.

The first endeavor to establish a town below the junction of the rivers, in 1857, failed due to misfortunes of two of the three participants. No further attempt to utilize the impressive water power was made until 1869–1870, when a colony of about 50 families from Genesee County, New York moved in, purchased land and water power rights, and began establishing a community. The Blue Rapids Town Company was formed, and by the end of 1870 the population was about 250. In 1872, Blue Rapids was incorporated as a city of third class under the statutes of Kansas.

Among the first projects in 1870 were a stone dam and a wrought iron bridge built on the Big Blue River. A hydroelectric power plant was then added to provide power for manufacturing and for the town. The power plant was destroyed by a flood in 1903. In the late 19th century and early 20th century there were four gypsum mines in the area. The population peaked around 1910 at over 1,750. The public library, built in 1875, is the oldest library west of the Mississippi in continuous operation in the same building.

Blue Rapids was the birthplace of the pancreatic cancer drug Streptozotocin. The bacterium from which the drug is derived was discovered in the late 1950s in a soil sample taken from "an uncultivated sandy soil in a grassland region" at Blue Rapids.

Blue Rapids claims to be the smallest town in the U.S. to have hosted a national league baseball game. On October 24, 1913, more than 3,000 fans watched the Chicago White Sox and New York Giants play a world tour exhibition game on the local ball field that is still in use today.

In 2001, Blue Rapids became the site of a new NOAA Weather Radio transmitter, KZZ67, to provide weather and emergency information from the National Weather Service in Topeka, Kansas to residents of north-central and northeast Kansas.

In May 2012, "The Monument to the Ice Age" was dedicated in the town square. It features descriptions of Ice Age times, continental glaciers, and Sioux Quartzite glacial erratics -the oldest rocks in Kansas. The main reason for this Ice Age Monument is that Blue Rapids was founded in a place with abundant natural resources brought or created by the glaciers of the Ice Age over 10,000 years ago. The namesake rapids on the Blue River that were harnessed to power early industries, the sand and gravel deposits used for construction and roads, and the rich soils for agriculture are all here because of the Ice Age glaciers. The Monument honors this ancient geological heritage. Glacial erratic that was deposited in the glaciated region of Kansas during the Pleistocene era.

Georgia-Pacific has a gypsum mine near Blue Rapids containing some of the purest gypsum in the world.

There were 415 households of which 29.9% had children under the age of 18 living with them, 51.3% were married couples living together, 7.0% had a female householder with no husband present, 5.1% had a male householder with no wife present, and 36.6% were non-families. 32.0% of all households were made up of individuals and 15.9% had someone living alone who was 65 years of age or older. The average household size was 2.37 and the average family size was 3.00.

All content from Kiddle encyclopedia articles (including the article images and facts) can be freely used under Attribution-ShareAlike license, unless stated otherwise. Cite this article:
Blue Rapids, Kansas Facts for Kids. Kiddle Encyclopedia.