Kids Encyclopedia Facts
Not to be confused with Ottawa, Kansas. 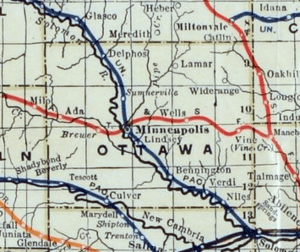 Ottawa County (standard abbreviation: OT) is a county located in the U.S. state of Kansas. As of the 2020 census, the county population was 5,735. The largest city and county seat is Minneapolis.

Following amendment to the Kansas Constitution in 1986, Ottawa County remained a prohibition, or "dry", county until 2006, when voters approved the sale of alcoholic liquor by the individual drink with a 30% food sales requirement.

The largest lake is Ottawa State Fishing Lake, a 111-acre (0.45 km2) reservoir to the east of Minneapolis. It is managed by the Kansas Department of Wildlife and Parks. 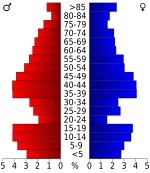 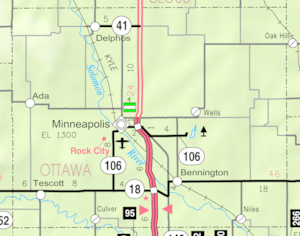 Ottawa County is divided into twenty townships. The city of Minneapolis is considered governmentally independent and is excluded from the census figures for the townships. In the following table, the population center is the largest city (or cities) included in that township's population total, if it is of a significant size.

All content from Kiddle encyclopedia articles (including the article images and facts) can be freely used under Attribution-ShareAlike license, unless stated otherwise. Cite this article:
Ottawa County, Kansas Facts for Kids. Kiddle Encyclopedia.