Dickinson County (county code DK) is a county located in Central Kansas. As of the 2010 census, the county population was 19,754. Its county seat and most populous city is Abilene. The county was named in honor of Daniel S. Dickinson.

In 1857, Dickinson County was founded.

The first railroad in Dickinson County was built through that territory in 1866.

In 1887, Mr. Herington successfully got the Chicago, Kansas and Nebraska Railway to build through Herington. He gave the land and right-of-way for Herington to become a division point with shops, two round houses, freight house, bridge yards, telegraph office and many other buildings. He furnished the limestone for the freight house, and for a two story depot that was 28 by 66 feet (8.5 m × 20.1 m) and later enlarged to 28 by 105 feet (8.5 m × 32.0 m).

In 1996, the Atchison, Topeka and Santa Fe Railway merged with Burlington Northern Railroad and renamed to the current BNSF Railway. Most locals still refer to this railroad as the "Santa Fe".

In 2010, the Keystone-Cushing Pipeline (Phase II) was constructed north to south through Dickinson County, with much controversy over tax exemption and environmental concerns. A pumping station named Hope was built along the pipeline. 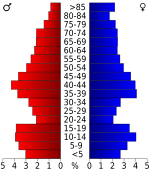 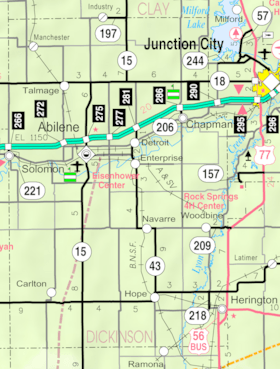 Dickinson County is divided into twenty-four townships. The cities of Abilene and Herington are considered governmentally independent and are excluded from the census figures for the townships. In the following table, the population center is the largest city (or cities) included in that township's population total, if it is of a significant size.

The Eisenhower Library is located in Abilene. In addition to exhibits relating to the life and presidency of the 34th US President, the site is also the location of the tombs of President Eisenhower, First Lady Mamie Eisenhower, and their son who died in infancy.

All content from Kiddle encyclopedia articles (including the article images and facts) can be freely used under Attribution-ShareAlike license, unless stated otherwise. Cite this article:
Dickinson County, Kansas Facts for Kids. Kiddle Encyclopedia.