McPherson County (standard abbreviation: MP) is a county located in the U.S. state of Kansas. As of the 2010 census, the county population was 29,180. The largest city and county seat is McPherson. The county is named for Civil War General James B. McPherson. 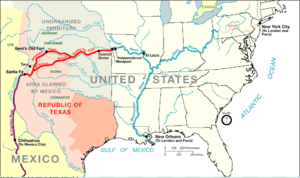 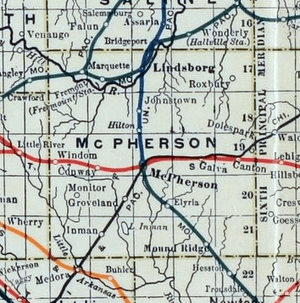 From the 1820s to 1870s, the Santa Fe Trail passed through, what is now McPherson County. The trail entered the county, east of Canton, then south of Galva, then north of Inman, and west towards Lyons. In 1855, Charles O. Fuller established a ranch adjacent to the Running Turkey Creek Crossing about two miles south and one mile east of Galva. Fuller's Ranch provided accommodations for travelers on the Santa Fe Trail and was probably the first white settlement in McPherson County.

Peketon County was established in 1860, by the passage of a bill by S. N. Wood: An act to establish Peketon County. Section 1. - That all that territory west of the sixth principal meridian and south of Township 16, in Kansas Territory, be and the same is hereby erected into a county, to be known by the name of Peketon County. On February 17, 1865, Peketon County was abolished, and McPherson County was made a part of Marion County, which extended from the west line of Chase County to the present western boundary of Kansas.

In 1868, Solomon Stephens and L. N. Holmberg were appointed Justices of the Peace - the first officers in what is now McPherson County. The next year (1869) occurred the first election for the township, now the county of McPherson. McPherson was regularly organized as a county in the spring of 1870, a mass meeting being held at Sweadal. Sweadal, the county seat thus selected, was located about one mile and a half southwest of the present site of Lindsborg. In September, however, the County Commissioners resolved to meet at the latter place, McPherson which had already been located some two years.

In April, 1873, a petition was filed for the county seat re-location. It was signed by 483 voters, and a special election was accordingly ordered for June 10. Upon that day, McPherson received 605 votes, New Gottland 325, King City 3 and Lindsborg 1; McPherson's majority over all, 276. In May the McPherson Town Company had offered, as an inducement for the location of the county seat at this point, the free use of rooms for ten years, and the donation of two squares of land on the town site. The offer was accepted the next month, the County Commissioners selecting blocks 56 and 65. Thus the county seat was established at McPherson and has remained since.

As early as 1875, city leaders of Marion held a meeting to consider a branch railroad from Florence. In 1878, Atchison, Topeka and Santa Fe Railway and parties from Marion County and McPherson County chartered the Marion and McPherson Railway Company. In 1879, a branch line was built from Florence to McPherson, in 1880 it was extended to Lyons, in 1881 it was extended to Ellinwood. The line was leased and operated by the Atchison, Topeka and Santa Fe Railway. The line from Florence to Marion, was abandoned in 1968. In 1992, the line from Marion to McPherson was sold to Central Kansas Railway. In 1993, after heavy flood damage, the line from Marion to McPherson was abandoned. The original branch line connected Florence, Marion, Canada, Hillsboro, Lehigh, Canton, Galva, McPherson, Conway, Windom, Little River, Mitchell, Lyons, Chase, then connected with the original AT&SF main line at Ellinwood.

In 1887, the Chicago, Kansas and Nebraska Railway extended its main line from Herington to Pratt. This main line connected Herington, Ramona, Tampa, Durham, Waldeck, Canton, Galva, McPherson, Groveland, Inman, Medora, Hutchinson, Whiteside, Partridge, Arlington, Langdon, Turon, Preston, Natrona, Pratt. In 1888, this main line was extended to Liberal. Later, this line was extended to Tucumcari, New Mexico and Santa Rosa, New Mexico, where it made a connection with the Southern Pacific from El Paso, Texas. The Chicago, Kansas and Nebraska Railway was absorbed by the Chicago, Rock Island and Pacific Railway. This line is also called the "Golden State Route".

The National Old Trails Road, also known as the Ocean-to-Ocean Highway, was established in 1912, and was routed through Windom, Conway, McPherson. 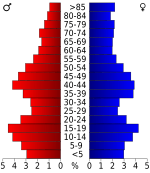 The McPherson Micropolitan Statistical Area includes all of McPherson County. 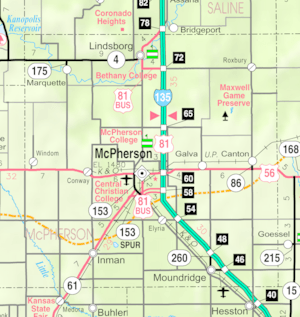 McPherson County is divided into twenty-five townships. The cities of Lindsborg and McPherson are considered governmentally independent and are excluded from the census figures for the townships. In the following table, the population center is the largest city (or cities) included in that township's population total, if it is of a significant size.

All content from Kiddle encyclopedia articles (including the article images and facts) can be freely used under Attribution-ShareAlike license, unless stated otherwise. Cite this article:
McPherson County, Kansas Facts for Kids. Kiddle Encyclopedia.