Ellsworth County (county code EW) is a county located in the U.S. state of Kansas. As of the 2020 census, the county population was 6,376. Its county seat and most populous city is Ellsworth. 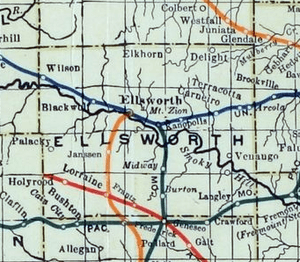 For many millennia, the Great Plains of North America were inhabited by tribes of nomadic Native Americans. They developed a complex culture based on using the bison as their main source of food, and adopting horses in the 17th century from Spanish colonists.

From the 16th century to 18th century, the Kingdom of France claimed ownership of large parts of North America both east and west of the Mississippi River. In 1762, after losing the French and Indian War to Great Britain, France secretly ceded New France to Spain, per the Treaty of Fontainebleau. In 1763 France ceded its territories east of the Mississippi River to Great Britain.

It regained the western territory under Napoleon, who sold it in 1803 to the United States in the Louisiana Purchase. He had decided to get rid of the New World territories after failing to regain control of Saint-Domingue, where a slave rebellion had toppled colonial control. In 1804 Haiti declared independence as the second republic of the Western Hemisphere.

The Plains Indians retained control of much of their territory until the late 19th century, giving way finally before superior United States arms and technology. Their territories were invaded by settlers, and crossed by the development of improved routes for settlers' emigrant wagon trains to the West Coast, followed by more permanent construction of transcontinental railroads. These brought tens of thousands of settlers to the Plains.

In 1854, the Kansas Territory was organized; and in 1861 Kansas became the 34th U.S. state. Ellsworth County was established February 26, 1867. The county was named after the old Fort Ellsworth, named in honor of 2nd Lieutenant Allen Ellsworth of the 7th Iowa Cavalry (Company H), who supervised construction of the fort in 1864 during the American Civil War. On November 17, 1866, the fort was renamed Fort Harker in honor of General Charles Garrison Harker who had died on June 27, 1864, from wounds received in an abortive offensive action in the Battle of Kennesaw Mountain. The fort was subsequently moved to a new site about one mile to the northeast, and the old fort's remaining buildings were ordered torn down in June 1867.

On March 22, 1869, Fourteen Pawnee Indians, including scouts who had been honorably discharged after working for the army, were traveling through Ellsworth County when they ran into U.S. cavalry troops. Though the Pawnees had discharge papers from the army, a fight ensued. The Indians retreated to a sandstone cave, known today as Palmer's Cave. Their attackers set fire to grass at the cave’s entrance, and six to nine Pawnees were killed as they ran out. The others died from exposure without their possessions.

In the later 19th century, this area became known for cattle ranching and cattle drives. Town life was often riotous with cowboys celebrating after long drives. 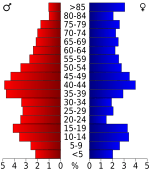 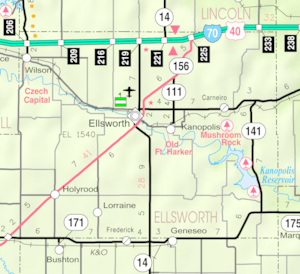 Ellsworth County is divided into nineteen townships. The city of Ellsworth is considered governmentally independent and is excluded from the census figures for the townships. In the following table, the population center is the largest city (or cities) included in that township's population total, if it is of a significant size.

All content from Kiddle encyclopedia articles (including the article images and facts) can be freely used under Attribution-ShareAlike license, unless stated otherwise. Cite this article:
Ellsworth County, Kansas Facts for Kids. Kiddle Encyclopedia.