Kanopolis is a city in Ellsworth County, Kansas, United States. As of the 2020 census, the population of the city was 443. It was built on the site of Fort Harker, a United States Army post that housed infantry and cavalry troops involved in the Indian Wars from 1867 to 1872.

Fort Ellsworth was the first frontier fort established in the Kanopolis area. It was built by the United States Army in August, 1864 at the junction of the Fort Riley-Fort Larned Road and the Smoky Hill Trail, near the Smoky Hill River. Its purpose was to protect construction of the Union Pacific railroad from Native American raids. In November, 1866 Fort Ellsworth changed its name to Fort Harker after the death of General G.H. Charles Harker, who was killed in battle in 1864.

By this time, the fort had grown in importance as a military staging post and supply depot for forts further west, and needed to expand to continue meeting its mission. As a result, on November 17, 1866, the Army ordered the construction of a new fort approximately three-quarters mile east of the current location. The original Fort Ellsworth was closed in early 1867, and the town of Ellsworth was founded in its place.

In January 1867, Fort Harker was relocated approximately three-quarters mile east of the old location to an open prairie about one mile north of the Smoky Hill river. This new location featured a "large, well-equipped" hospital," which housed those were ill. The hospital was surely busy, as about 200 people died in 1867 from cholera in and around the Fort Harker area. < For the next five years, Fort Harker became one of the most important military stations west of the Missouri River.[cite the Guardhouse national register nomination] It used 700 soldiers and twice as many civilian employees, as well as 400 horses and mules. Additionally, the mail to all military posts down the Arkansas river, as well as many posts in Colorado and New Mexico, was supplied from Fort Harker.

Over the coming years, the threat of Native American raids in the region diminished as territory was secured and railroad construction moved west. No longer of geographic significance, Fort Harker was abandoned on April 2, 1872 and the war department ordered it to be closed shortly thereafter. Its garrison was relocated to Fort Hays. In the winter of 1872-1873, Fort Harker briefly stationed troops once more before being deserted one final time. In the following years, Fort Harker became the Fort Harker Military Reservation.

In June of 1880, the Senate passed bill S.194, an act disposing Fort Harker Military Reservation of public ownership and giving the 10,240 acre tract of land to the Interior Department for sale. A Dr. Hodge acquired the land and sold it to Col. Henry Johnson for $4,177.50 in August, 1881. In summer of 1885, a seventeen-member group of capitalists based in Ohio led by Ross Mitchell (president), F.M. Bookwalter (vice president), and John H. Thomas (treasurer) purchased 4,740 acres of the land, including Fort Harker and its buildings, for $71,000 from Col. Johnson. Imagining their newly acquired land would soon become a "Central Metropolis," and a future capitol because of its location, the group became chartered as the Kanopolis Land Company on March 15, 1886, with a capital stock of $500,000. They laid out land for 150,000 people[8] and shortly after, the town of Kanopolis was founded. 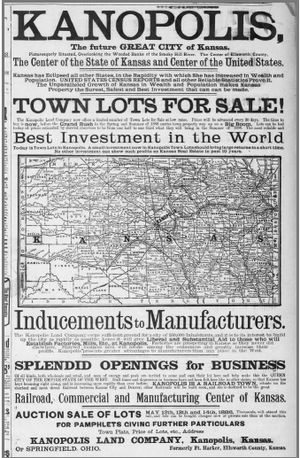 A Kanopolis advertisement in The Lawrence Journal, May 1886

The Kanopolis Land Co., with editor R.V. Morgan, advertised in other newspapers and in a paper of their own called The Kanopolis Journal to attract buyers to Kanopolis. These advertisements serve as examples of the boosterism characteristic of the frontier west. One from May 1886 proclaimed Kanopolis "is destined to be the railroad, commercial, and manufacturing capital of Kansas" and said buying land in Kanopolis is the "Best investment in the world." Another in July 1887 declared it to be the only town in the state with railroads running north, south, east, and west and also claimed to have seven factories, thirteen stores, and a hotel. It reported the population to be 600 when the town was "scarcely" one year old.

More hyperbolic than the advertisements in other newspapers was The Kanopolis Journal. It boasted Kanopolis to have "woolen mills, iron factories, carriage works, flour mills, wholesale houses, banks, a drug store, and an opera house, doctors, and machine shops," as well as a brewery. Additionally, the journal predicts Kanopolis would soon be the furniture hub of the midwest, saying it "is not one-half the distance from a limitless supply of walnut, oak, ash, poplar and all lumber needed in the manufacture of furniture as is Grand Rapids, Michigan, which owes its prosperity to the furniture business." It said that in forty years it will have 500,000 inhabitants, as it had already "grown as populous as Cincinnati did in eleven years or Cleveland did in thirty years." The journal also describes giant potatoes, cabbage leaves that "are used for circus tents," jack rabbits that "grow as large as horses," and pea pods that "are used as ferry boats on the Arkansas river." It also claims "A man planted a turnip one mile from the railroad last summer and the company sued him for obstructing the track before the middle of July." Additionally, the journal says that "North of Kanopolis are several lakes of strained honey, and we also often have showers of rosewater and cologne in the early spring." The journal even says the area around Kanopolis is the real garden of Eden, and that there is a fig tree that Eve herself used to make her first clothes, and that the tree is "like our flag - it is still there, and furnishes evidence which our oldest inhabitants dare not dispute.... This settlement of Western Kansas is restoring Eden to its primitive glory and men to their first estate."

Kanopolis, for a variety of reasons, never became the "Queen City of the Midwest" that its backers "ballyhooed" it would become. Perhaps its biggest injury was when it lost a referendum by 75 votes to become the seat of Ellsworth county. Also, it had some contemporary antagonists. An editorial in a January, 1887 paper from the Leavenworth Times calls Kanopolis a "buffalo wallow," a "scheme," and a "fraud" from an "eastern syndicate.". A lawsuit between the Kanopolis Land Co. and R.V. Morgan in 1895 ensued, likely detracting from the company's ability to advertise and sell land. By 1906, Kanopolis' population had fallen to 264.

The climate in this area is characterized by hot, humid summers and generally mild to cool winters. According to the Köppen Climate Classification system, Kanopolis has a humid subtropical climate, abbreviated "Cfa" on climate maps.

There were 235 households, of which 20.4% had children under the age of 18 living with them, 50.6% were married couples living together, 7.2% had a female householder with no husband present, 6.4% had a male householder with no wife present, and 35.7% were non-families. 34.0% of all households were made up of individuals, and 15.4% had someone living alone who was 65 years of age or older. The average household size was 2.09 and the average family size was 2.58.

Independent Salt Company is located over a mile northeast of in Kanopolis.

The community is served by Ellsworth USD 327 public school district. The district high school is located in Ellsworth. The Ellsworth High School mascots are the Ellsworth Bearcats.

All content from Kiddle encyclopedia articles (including the article images and facts) can be freely used under Attribution-ShareAlike license, unless stated otherwise. Cite this article:
Kanopolis, Kansas Facts for Kids. Kiddle Encyclopedia.