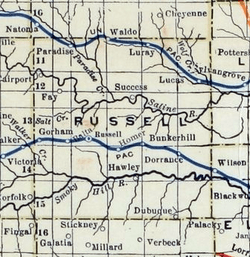 Russell County (standard abbreviation: RS) is a county located in the U.S. state of Kansas. As of the 2010 census, the population was 6,970. The largest city and county seat is Russell.

Russell, the county seat, was the home of former U.S. Senate Majority leader and 1996 GOP presidential nominee Robert Dole for many years. It was also the boyhood home of U.S. Senator Arlen Specter of Pennsylvania, who was born in Wichita.

The city of Russell is the junction of Interstate 70, a major east-west highway through the Midwestern United States, and U.S. Route 281, which begins at the Canada–US border in North Dakota and ends at the Mexico–US border in Texas. I-70 also runs through Gorham on the western end of the county and Dorrance on the eastern end. Hays is 27 miles (43 km) west of Russell and Salina is 67 miles (108 km) east of Russell.

K-18, a major east-west state highway in northern Kansas, enters from Osborne County to the west and runs through Paradise before joining up with US 281 through Waldo. US 281 and K-18 split again at the city limits of Luray, and K-18 continues east through Lucas and into Lincoln County. US 281 heads north into Osborne County.

South of I-70, US 281 heads into Barton County and towards the city of Great Bend. 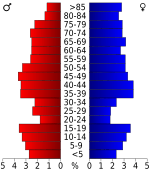 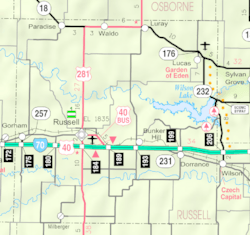 Russell County is divided into twelve townships. The city of Russell is considered governmentally independent and is excluded from the census figures for the townships. In the following table, the population center is the largest city (or cities) included in that township's population total, if it is of a significant size.

All content from Kiddle encyclopedia articles (including the article images and facts) can be freely used under Attribution-ShareAlike license, unless stated otherwise. Cite this article:
Russell County, Kansas Facts for Kids. Kiddle Encyclopedia.