Ellis County (county code EL) is a county located in the U.S. state of Kansas. As of the 2010 census, the county population was 28,452. Its county seat and most populous city is Hays.

Ellis County is the official German Capital of Kansas. German immigrants settled in Hays, Ellis, Victoria, and nearby villages in the 1870s and 1880s.

In 1854, the Kansas Territory was organized, then in 1861 Kansas became the 34th U.S. state. Ellis County was founded on February 26, 1867. It is named for George Ellis, first lieutenant of the Twelfth Kansas Infantry.

In 1942, the Walker Army Airfield was built northwest of Walker. Thousands were stationed at the airfield for training of the Boeing B-29 Superfortress during World War II. The airfield was abandoned and most of it razed. 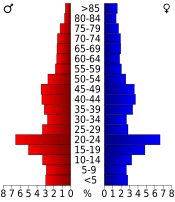 The Hays Micropolitan Statistical Area includes all of Ellis County. 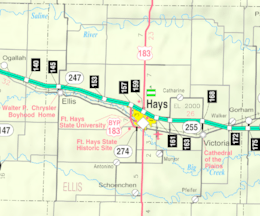 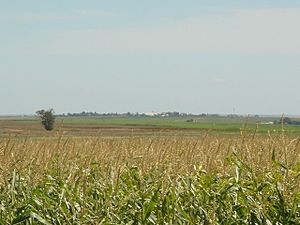 The town of Antonino

Ellis County is divided into nine townships. The cities of Ellis and Hays are considered governmentally independent and are excluded from the census figures for the townships. In the following table, the population center is the largest city (or cities) included in that township's population total, if it is of a significant size.

All content from Kiddle encyclopedia articles (including the article images and facts) can be freely used under Attribution-ShareAlike license, unless stated otherwise. Cite this article:
Ellis County, Kansas Facts for Kids. Kiddle Encyclopedia.