Kids Encyclopedia Facts
Not to be confused with Osborne, Kansas.

Osborne County (standard abbreviation: OB) is a county located in the U.S. state of Kansas. As of the 2010 census, the county population was 3,858. The largest city and county seat is Osborne.

During the Civil War the Kansas legislature ordered the survey of western two-thirds of the new state in anticipation of future settlement. An escort of soldiers from Fort Riley accompanied U.S. Deputy Surveyors D. E. Ballard and E. C. Manning as they commenced the survey of what is now Osborne County on September 8, 1862. Early the next year, however, they had to suspend their surveying efforts due to the proximity of, and objections from, the natives of the area - the Indians.

At this time the Solomon River valley was rich with beaver, antelope, elk, and buffalo. Several Indian tribes had hunted in the valley for decades and were in no mood to share the land with settlers bent on decimating the abundant game, plowing under the lush grass for farming, and just generally changing the way things were.

Some 200 Cheyenne were encamped in the county when Ballard and Manning were ordered to resume the survey in 1866. While escorting the surveying party along Twin Creek on July 21, soldier Edward Roche of Company I, 2nd U.S. Cavalry, was killed by Indians. They buried him at what later became the common corner of Corinth, Penn, Winfield and Bloom Townships. On May 15, 1868, the survey of Osborne County was at last completed. The boundaries of the county were defined by the legislature on March 3, 1867. The governor named it in honor of Captain Vincent B. Osborne, a Civil War soldier who lost a leg in a battle on January 17, 1865, at Joy’s Ford on the Arkansas River. Later Osborne was elected State Representative of Ellsworth County in 1871 and served as Ellsworth County Probate Judge for a number of years prior to his death at age 40 of erysipelas on December 21, 1879. Oddly, Osborne never set foot in the county named after him.

On January 14, 1870, George Wolberd filed the county’s first homestead claim in the extreme northeast corner of Osborne County. John M. Boer filed a homestead claim next to Wolberd later the same day. Both men were members of the Rotterdam Dutch Colony that settled in 1869 and 1870 along Oak Creek in what are now Mitchell, Osborne, Jewell, and Smith Counties.

Zarah Hill came to the North Fork Solomon River valley on March 1, 1870, and filed a claim on March 25 for land in the northeast corner of what later became Bethany Township. He was the third man to homestead in the county.

That same month brothers Charles and William Bullock made the first permanent non-native settlement in the county on the north side of the South Solomon River in what is now Tilden Township. They constructed a double cabin with port holes surrounded with a log enclosure for their horses and the "Bullock Ranche" became the terminus for all early homestead and hunting parties in northwest Kansas over the next two years.

After its creation in 1867 Osborne County was attached to Mitchell County for legal purposes, as the county had not formally organized. The first couple married in the county, Solomon Weatherman and Marinda Alling, had to travel to Beloit to obtain a marriage license before returning to their homestead two miles south of modern-day Bloomington. They were married there on March 1, 1871.

The second town in Osborne County, Arlington, was founded when Calvin Reasoner opened a log general store two miles east of present-day Bloomington in late 1870. On May 27, 1871, a meeting was held on the steps of Calvin Reasoner and Frank Thompson’s general store in Arlington to discuss preliminary steps towards organization of the county. To no one’s surprise, Reasoner was elected chairman of the meeting and Thompson secretary. A census committee of Charles Cunningham, William Bullock and A. B. Fleming was appointed to ascertain whether the county held the 700 residents required for securing state recognition of legal organization, and it was decided to reconvene one week later on Saturday, June 3, 1871, at Arlington with the results.

The Pennsylvania Colony had founded the town of Osborne City on May 1, 1871, with the intention of making it the county seat - a hope that Calvin Reasoner desired for his own town of Arlington. He therefore kept secret the May 27th meeting from the Colony and did his best to do the same with the second meeting. He failed.

"He [Reasoner] sent runners north, south, and west, notifying them to be at Arlington at seven p.m. that day for the purpose of locating a county seat. One of their men came to our Colony at four p.m. and told. Our men started at once, north, east, and south, telling every one to meet here at six p.m., that the county seat was to be located. Some forty men responded. They were told what Calvin Reasoner had done and all of them got to Arlington before seven p.m. Of course the Arlington bunch was surprised." - Frank A. Rothenberger, Pennsylvania Colony member.

The meeting was called to order with Calvin Reasoner as chairman. The Pennsylvania Colony held the majority of the persons attending. The census committee reported 724 inhabitants and 281 voters in the county, a sufficient number under law to further proceed with organization.

"After assembling we found that we were a majority; however, we kept quiet until the time came to choose a temporary county seat, when one of our number arose and moved that Osborne City be declared the temporary county seat, which received an immediate second by another of our party. Then the fun commenced; a general hubbub ensued. After awhile a gentleman arose and asked, ‘Where is Osborne City? We have never heard of the town!’ Our president then arose and deliberately drew from his pocket the charter of Osborne City, containing the great seal of the secretary of the state of Kansas, which he exhibited to the audience. He then demanded of each of the champions for other towns that they show theirs, but they were obliged to confess that they had none. An effort was then made to postpone the vote until another meeting." - Francis Gruger, Pennsylvania Colony member.

"Cal had sent a man to Russell to call for a requisition from the governor. A vote was taken and our crowd won by four. The chairman stated it wouldn’t do them [the colonists] any good, as they had to have the proper papers signed by the governor. Major Henry D. Markley said they had attended to that on coming into the state, and produced the papers and said it had to be settled right now, and it was." - Frank A. Rothenberger.

Apart from the county seat question, Calvin Reasoner’s chief objective for the June 3rd meeting, legal organization of the county, was accomplished. Charles Cunningham, Samuel Chatfield, and Frank Stafford were elected special county commissioners. Frank Thompson was named county clerk and Osborne City became the temporary county seat. Cunningham, A. B. Fleming, and Charles Bullock were appointed to draft a petition to the governor praying for recognition of Osborne County’s legal organization.

The census presented at the meeting included all parties having claims in the county and showed that at the time half of the adult males in the county were bachelors. Unfortunately the first names of all women and children residing in the county were not listed in the census, and so the state authorities found the census defective. They stopped action on recognition of the county’s organization until a second census was completed. This was done and on September 12, 1871, Kansas Governor James Harvey issued a proclamation declaring the county organized and a legal entity. Elections for the various county offices were held that November and Osborne County was officially organized.

Frontiersman Charles "Buffalo" Jones lived in a sod house for a time on a homestead in Section 19 of Tilden Township, Osborne County, from 1872 to 1876, prior to his co-founding Garden City, Kansas, in 1879.

Biographies of prominent men and women from throughout Osborne County's history, including Jones, can be found at the Osborne County Kansas Hall of Fame website.

The geodetic center of North America is located within the county.[1] The geographic center of the 48 contiguous states is located in neighboring Smith County. 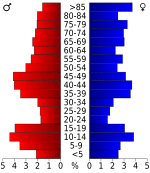 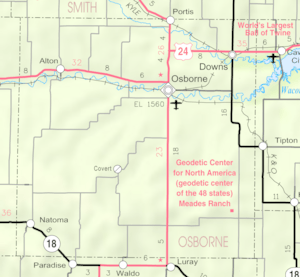 Osborne County is divided into twenty-three townships. The city of Osborne is considered governmentally independent and is excluded from the census figures for the townships. In the following table, the population center is the largest city (or cities) included in that township's population total, if it is of a significant size.

All content from Kiddle encyclopedia articles (including the article images and facts) can be freely used under Attribution-ShareAlike license, unless stated otherwise. Cite this article:
Osborne County, Kansas Facts for Kids. Kiddle Encyclopedia.