Victoria is a city in Ellis County, Kansas, United States. As of the 2010 census, the city population was 1,214. 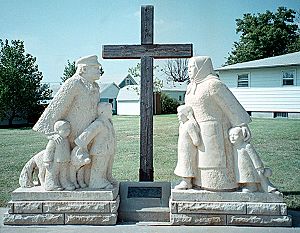 Commemorative statue of a Volga German pioneer family in Victoria (1997)

A group of English and Scottish colonists led by a Scotsman named George Grant founded Victoria in 1873 on land he had purchased from the Kansas Pacific Railway. They named the settlement after Queen Victoria. Grant intended for Victoria to be a ranching community and was purportedly responsible for bringing the first Aberdeen Angus cattle to the United States. Most of the colonists, however, were remittance men more interested in sports and dancing than in raising livestock. Their families soon learned of this and reduced the remittances, driving most of the colonists to leave by 1880. Some returned to Britain; others left for South America.

In 1876, Volga Germans from villages near Saratov, Russia established the settlement of Herzog one half mile north of Victoria. Herzog's Roman Catholic settlers built a series of churches which culminated in the construction of St. Fidelis Catholic Church, known as "The Cathedral of the Plains," in 1911. Herzog grew rapidly and later absorbed Victoria, eventually adopting the older settlement's name. Herzog was officially renamed Victoria in 1913.

In 1942, the U.S. Army built Walker Army Airfield 3 miles northeast of Victoria. During World War II, thousands were stationed at the airfield, most for training in operation of the Boeing B-29 Superfortress bomber aircraft. The military closed the base in 1946.

In 1966, construction of Interstate 70 reached Victoria, passing north of the city.

According to the United States Census Bureau, the city has a total area of 0.59 square miles (1.53 km2), all of it land.

There were 496 households of which 29.6% had children under the age of 18 living with them, 53.4% were married couples living together, 3.8% had a male householder with no wife present, 6.5% had a female householder with no husband present, and 36.3% were non-families. 33.1% of all households were made up of individuals, and 15.7% had someone living alone who was 65 years of age or older. The average household size was 2.30, and the average family size was 2.93. 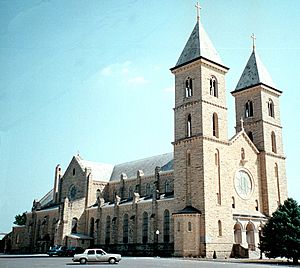 The Herzogfest is Victoria's annual community festival, held to celebrate the city's ethnic German heritage. Held in August, it includes music concerts, a talent show, a tractor pull, games for children, and other local entertainment.

The Basilica of St. Fidelis, known as "The Cathedral of the Plains", is located in Victoria. Local Roman Catholic residents, having outgrown a series of church buildings as their population grew, began construction of the church in 1908. Built from native limestone based on plans by noted church architect John T. Comes, St. Fidelis Catholic Church was completed in 1911. William Jennings Bryan gave the church its nickname during a visit in 1912. In June 2014, the Roman Catholic Diocese of Salina dedicated the church as a minor basilica, renaming it the Basilica of St. Fidelis.

All content from Kiddle encyclopedia articles (including the article images and facts) can be freely used under Attribution-ShareAlike license, unless stated otherwise. Cite this article:
Victoria, Kansas Facts for Kids. Kiddle Encyclopedia.