Russell is the most populous city in and county seat of Russell County, Kansas, United States. As of the 2010 census, the city population was 4,506.

Russell is also the birthplace and hometown of Bob Dole, the former long-time U.S. Senator from Kansas (1969-1996), as well as the Republican nominee for President in 1996 and for Vice President under President Gerald Ford in the 1976 election. 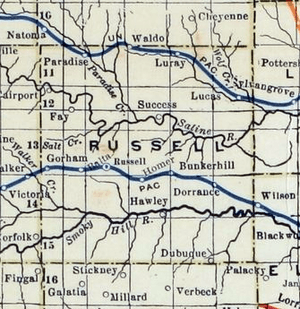 In 1865, the Butterfield Overland Despatch established a short-lived station named Fossil Creek Station along its route from Atchison, Kansas to Denver near the site of modern Russell. In 1867, the Kansas Pacific Railway reached the area and built its own station, also named Fossil Creek, later just Fossil, north of the Butterfield station. That same year, the Kansas Legislature established the surrounding area as Russell County. In 1871, colonists from Ripon, Wisconsin established a permanent settlement at Fossil Station, renaming it Russell after the county. Russell was incorporated and named the provisional county seat in 1872, and, after a two-year dispute with neighboring Bunker Hill, it became the permanent county seat in 1874. In 1876, Volga Germans, mostly from the area around Saratov and Samara in Russia, began settling in and around Russell.

The first discovery oil well in Russell County was drilled west of Russell in 1923. An oil boom ensued and lasted through the 1930s, attracting settlers from Oklahoma and Texas. Petroleum production became a staple of the local economy.

Russell came to national attention in the mid-1990s as the hometown of U.S. Senators Bob Dole and Arlen Specter when both men campaigned for the U.S. presidency. Dole was born and raised in Russell, and it remained his official place of residence throughout his political career.

Lying in the transition zone between North America's humid subtropical climate (Köppen Cfa) and humid continental climate (Köppen Dfa), Russell experiences hot, humid summers and cold, dry winters. On average, January is the coldest month, and July is both the hottest month and the wettest month.

The city is located near the eastern edge of western Kansas's semi-arid steppe climate (Köppen BSk), and precipitation is sometimes scarce. The city receives 26 inches (660 mm) of precipitation during an average year with the largest share being received from May through August. The average relative humidity is 64%. There are, on average, 86 days of measurable precipitation each year. Annual snowfall averages 20 inches (51 cm). Measurable snowfall occurs an average of 12 days a year with at least an inch of snow being received on seven of those days. Snow depth of at least an inch occurs an average of 26 days a year. Typically, the first fall freeze occurs by the second week of October, and the last spring freeze occurs by the last week of April.

There were 2,041 households of which 26.2% had children under the age of 18 living with them, 45.6% were married couples living together, 4.7% had a male householder with no wife present, 9.3% had a female householder with no husband present, and 40.4% were non-families. 36.4% of all households were made up of individuals, and 17.1% had someone living alone who was 65 years of age or older. The average household size was 2.16, and the average family size was 2.79.

There were 2,057 households out of which 25.7% had children under the age of 18 living with them, 49.9% were married couples living together, 8.3% had a female householder with no husband present, and 39.2% were non-families. 34.1% of all households were made up of individuals and 17.7% had someone living alone who was 65 years of age or older. The average household size was 2.20 and the average family size was 2.82.

The city government's Park Department maintains seven parks in the city. The largest is Memorial Park, located on the north side of the U.S. 40 business route in the far eastern part of the city. It includes baseball fields, tennis courts, a skateboard park, a play park, a frisbee golf course, and Russell Municipal Golf Course. The municipal course is a 9-hole, regulation length course that opened in 1952. In addition, the city government operates a municipal swimming pool next to Memorial Park. 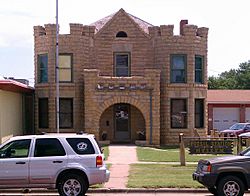 Located downtown, the Deines Cultural Center is a non-profit art gallery that hosts exhibits featuring the work of local and regional artists. Its permanent collections consist of paintings by Birger Sandzén and the wood engravings of local artist E. Hubert Deines. In addition, the Center also hosts concerts, recitals, lectures, readings, and workshops. The Center opened in 1990 with the Deines family's donation of its building, the Deines engravings, and a cash endowment to the city of Russell.

The city hosts the annual Russell County Free Fair during the last week of July. Sponsored by local businesses and organizations, the Fair includes a 4-H livestock sale, carnival, live music, and other entertainment. Other annual events include a Saint Patrick's Day parade, the Independence Day Freedom Fireworks Celebration, Chilifest in September, a Veterans Day parade, and Weihnachtfest, a Christmas festival held the first Saturday after Thanksgiving.

Every ten years since 1941, Russell has held Prairiesta, a festival commemorating the city's foundation and celebrating its heritage. Held in June, the festival includes a parade, carnival rides, live music, arts and crafts exhibits, and a historical pageant.

The Fossil Station Museum, also located in downtown Russell, displays artifacts from Russell County history dating back to the mid-1800s. Home to the Russell County Historical Society, the museum is housed in the former sheriff’s office and county jail, a fortress-like structure constructed of native “post rock” limestone in 1907.

The Russell County Historical Society has restored and maintains two examples of early limestone homes built in Russell, the Gernon House and the Heym-Oliver House. The Gernon House was built in 1872 by blacksmith Nicholas Gernon, one of the town’s original settlers, and doubled as a smithery. The Heym-Oliver House was built by settler Nicholas Heym in 1878.

The Oil Patch Museum, located just north of I-70 Exit 184, houses exhibits on area geology and the history of local petroleum drilling, production, and transportation.

All content from Kiddle encyclopedia articles (including the article images and facts) can be freely used under Attribution-ShareAlike license, unless stated otherwise. Cite this article:
Russell, Kansas Facts for Kids. Kiddle Encyclopedia.