Robert Joseph "Bob" Dole (born July 22, 1923) is an American statesman, and he is a former United States Senator from Kansas. He was the Republican leader of the Senate from 1985 to 1996. In 1996, he ran against Bill Clinton for President and lost. After that, he retired from politics at the age of 72.

In 2019, the U.S. Congress passed a bill promoting the 95-year-old Dole from Captain to Colonel. They did this to honor his service during World War II.

In 1976, Gerald Ford chose him to be his Vice Presidential choice for the November, 1976 election. They lost the election; Bob Dole never became Vice President.

Shortly after the 1996 election, he famously appeared in a Pepsi commercial, saying, "I just cannot win."

Dole has a habit of talking in the third person, or using his own name instead of "I" when he talks about himself. This habit is the basis for many jokes about Dole.

Dole graduated from Russell High School in the spring of 1941. He went to the University of Kansas starting in Fall 1941. Dole's college studies were stopped by World War II. He enlisted in the United States Army.

Dole attended the University of Arizona from 1948 to 1949. He then went to Washburn University and graduated with both undergraduate and law degrees in 1952.

Dole ran for office for the first time in 1950. He was elected to the Kansas House of Representatives. He served a two-year term.

In 1952, he became the County Attorney of Russell County.

In 1960, Dole was elected to the United States House of Representatives from Kansas' 6th Congressional District. He served till 1969, when he became a Senator. 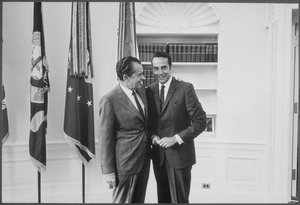 In 1976, President Gerald Ford (a Republican from Michigan) decided to make then-Senator Bob Dole his running mate. During the campaign, Dole made the unpopular remark that all wars in America had been caused by Democrats. This may have partially accounted for their narrow loss to the Democratic ticket (for president, Gov. Jimmy Carter of Georgia; for vice president, Sen. Walter Mondale of Minnesota).

In 1996, Dole was finally nominated for president, choosing as his running mate Jack Kemp, a footballer from New York State. He lost to Bill Clinton, and his running mate Al Gore (of Tennessee), who were running for a second term.

All content from Kiddle encyclopedia articles (including the article images and facts) can be freely used under Attribution-ShareAlike license, unless stated otherwise. Cite this article:
Bob Dole Facts for Kids. Kiddle Encyclopedia.