On May 4, 2016, Donald Trump of New York became the presumptive nominee after his only challengers left Ted Cruz of Texas and John Kasich of Ohio dropped out.

The total of 17 candidates makes it the largest presidential candidate field for any single political party in American history.

Before the Iowa caucuses on February 1, candidates Perry, Walker, Jindal, Graham, and Pataki withdrew due to low polling numbers. While leading many polls entering the Iowa caucuses, Trump came in second behind Senator Cruz. Carson dropped out after Super Tuesday on March 4, 2016.

This is an overview of the money used in the campaign as it is reported to Federal Election Committee and released on February 22, 2016. Outside groups are Independent expenditure only committees also called PACs and SuperPACs. Several such groups normally support each candidate but the numbers in the tablet are a total of all of them. This means that a group of committees can be shown as technical insolvent (shown in red) even though it is not the case of all of them.

The Campaign Committees debt are shown in red if the campaign is technical insolvent. The source of all the numbers is Center for Responsive Politics. Jim Gilmore's information is not currently available.

∗This is mainly a personal loan from the candidate to the campaign as part of the candidate's self-financing. 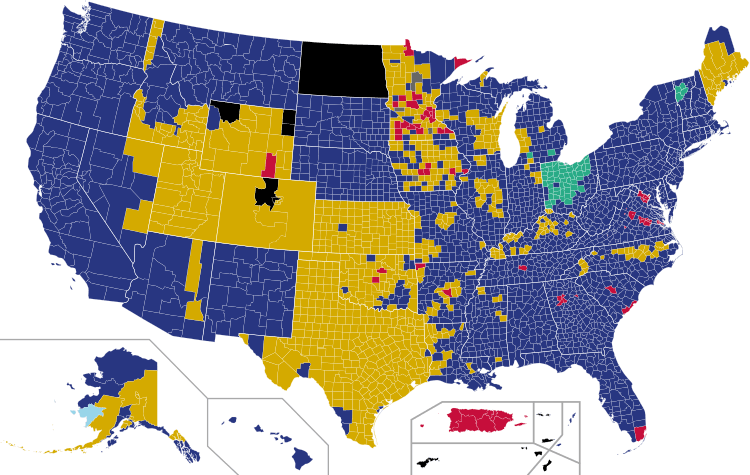 After the Iowa primaries, candidates Huckabee, Paul and Santorum withdrew due to poor performance at the ballot box. Following the New Hampshire primary, which was a sizable victory for Trump, candidates Christie, Fiorina and Gilmore withdrew. After the conclusion of the South Carolina primary, Bush withdrew from the race following a second win for Trump. Ben Carson dropped out on March 4, 2016. Marco Rubio dropped out on March 15, 2016 after losing to Trump in his home state of Florida. Ted Cruz dropped out on May 3, 2016 after losing to Trump in Indiana.

All content from Kiddle encyclopedia articles (including the article images and facts) can be freely used under Attribution-ShareAlike license, unless stated otherwise. Cite this article:
Republican Party presidential primaries, 2016 Facts for Kids. Kiddle Encyclopedia.