Jack French Kemp (July 13, 1935 – May 2, 2009) was an American politician and a collegiate and professional football player. A Republican, he served as Housing Secretary in the administration of President George H. W. Bush from 1989 to 1993.

Kemp was known for being a top adviser to President Ronald Reagan. He helped Reagan pass the Economic Recovery Tax Act of 1981. Some people say that he helped create the Reagan Revolution during the 1980s.

As a self-described "bleeding-heart conservative", Kemp represented a part of the suburban Buffalo region known as the Southtowns (that traditionally voted Democratic) in the United States House of Representatives from 1971 to 1989. He is as fondly remembered for his good hair and handsome looks as for his athletic prowess and political savvy, and was described as having the charisma of the earlier J.F.K. (John F. Kennedy). David Rosenbaum described Kemp as an independent politician who often legislated outside his committees' jurisdictions and often spoke in favor of ideals and principles rather than his party's political platforms.

Kemp served nine terms as a congressman for Western New York's 31st congressional district from 1971 to 1989. He was the Republican Party's nominee for Vice President in the 1996 election, where he was the running mate of presidential nominee Bob Dole.

Kemp had previously contended for the presidential nomination in the 1988 Republican primaries.

Before entering politics, Kemp was a professional quarterback for 13 years. He played briefly in the National Football League (NFL) and the Canadian Football League (CFL), but became a star in the American Football League (AFL). He served as captain of both the San Diego Chargers and Buffalo Bills and earned the AFL Most Valuable Player award in 1965 after leading the Bills to a second consecutive championship. 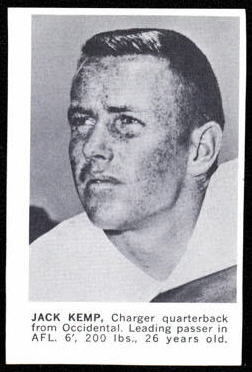 He played in the AFL for all 10 years of its existence, appeared in its All-Star game seven times, played in its championship game five times, and set many of the league's career passing records. Kemp also co-founded the AFL Players Association, for which he served five terms as president. During the early part of his football career, he served in the United States Army Reserve.

His legacy includes the Kemp–Roth Tax Cut of the 1980s, also known as the first of two "Reagan tax cuts." Kemp is also remembered alongside George Wallace and William Jennings Bryan for influencing history by changing the direction of presidential elections despite their defeats.

In the early 21st century, Kemp continued to be considered along with Reagan as the politician most responsible for the implementation of supply-side tax cuts and along with Steve Forbes as the political figure most responsible for their continued place in the marketplace of political ideas. He has been described as a beacon of economic conservatism and a hero for his urban agenda. Today, he continues to be described as a hero to fiscal conservatives who believe that free markets and low taxes work better than government bureaucracies.

In addition to Roth, he has had numerous political allies. Kemp was a member of the federal committee to promote Martin Luther King Jr. Day as a national holiday.

Congressman Paul Ryan cites Kemp as a mentor, and mentioned him in his acceptance speech as the Republican Vice-Presidential nominee in 2012.

Senator Arlen Specter in a severe rebuke of federal governmental policy, stated just one day after Kemp died of cancer, that Kemp would still be alive if the federal government had done a better job funding cancer research. 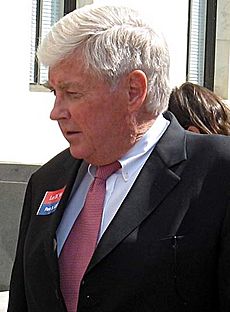 On January 7, 2009, Kemp's office issued a statement announcing that he had cancer; the type of cancer and the anticipated treatment were not announced. His diagnosis and prognosis were never publicly disclosed. However, he continued to serve as chairman of his Washington-based Kemp Partners consulting firm and continued his involvement in charitable and political work until his death.

On May 2, 2009, Kemp died at his home in Bethesda, Maryland, from cancer of unknown primary origin; he was 73. President Barack Obama praised Kemp's work on race, adding that Kemp understood that divisions involving race and class stood in the way of the country's common goals. Former President George W. Bush said that Kemp "will be remembered for his significant contributions to the Reagan Revolution and his steadfast dedication to conservative principles during his long and distinguished career in public service."

In April 2008, Kemp had announced plans to establish the Jack F. Kemp Institute of Political Economy at Pepperdine University's School of Public Policy. The plans were later scrapped and Kemp died the next year. Following his death, Jack's son, Jimmy Kemp, created the Jack Kemp Foundation in late 2009 to continue his father's legacy. A charitable organization, the foundation's mission statement is to "develop, engage and recognize exceptional leaders who champion the American Idea". The foundation is located in Washington, D.C, and is committed to advancing the universal values of the American Idea: growth, freedom, democracy and hope.

All content from Kiddle encyclopedia articles (including the article images and facts) can be freely used under Attribution-ShareAlike license, unless stated otherwise. Cite this article:
Jack Kemp Facts for Kids. Kiddle Encyclopedia.