Lying in state facts for kids 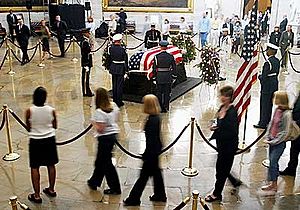 Ronald Reagan lying in state in the United States Capitol Rotunda on June 10, 2004

Lying in state is the tradition in which a coffin is placed on view to allow the public at large to pay their respects to the dead. It traditionally takes place in the principal government building of a country or city.

It is usually practiced in the United States, the United Kingdom, Canada, France, North Korea, South Africa, and Russia. Lying in state takes place during a state funeral.

All content from Kiddle encyclopedia articles (including the article images and facts) can be freely used under Attribution-ShareAlike license, unless stated otherwise. Cite this article:
Lying in state Facts for Kids. Kiddle Encyclopedia.