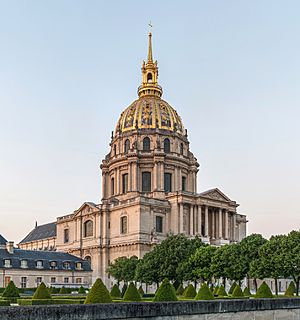 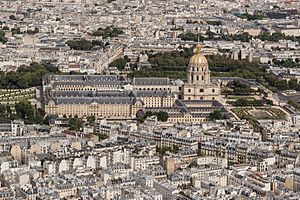 Les Invalides is a landmark in Paris, France. It was built between 1670 and 1676 as a place for retirement of French war veterans. It consists of several buildings. It was also used as a burial place for French marshals and generals. Les Invalides is best known for housing the tomb of Napoleon Bonaparte. Nowadays, the complex houses the Museum of Arms, the Museum of Contemporary History, and the Museum of Plains-Reliefs.

All content from Kiddle encyclopedia articles (including the article images and facts) can be freely used under Attribution-ShareAlike license, unless stated otherwise. Cite this article:
Les Invalides Facts for Kids. Kiddle Encyclopedia.