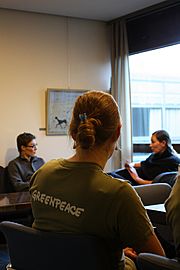 A campaigner from the environmental group Greenpeace lobbying the Finnish government

Lobbying is the act of trying to persuade governments to make decisions or support something. Lobbying can be done by many sorts of people, alone or in groups. Often it is done by big companies or businesses. Sometimes people are given jobs to lobby for big businesses. These people are called lobbyists.

All content from Kiddle encyclopedia articles (including the article images and facts) can be freely used under Attribution-ShareAlike license, unless stated otherwise. Cite this article:
Lobbying Facts for Kids. Kiddle Encyclopedia.