Florence is a city in Marion County, Kansas, United States. The city was named after the daughter of the third Governor of Kansas Samuel J. Crawford. As of the 2010 census, the city population was 465. 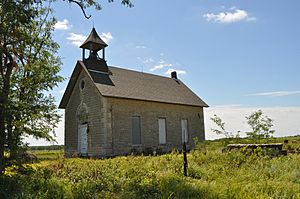 For millennia, the Great Plains of North America was inhabited by nomadic Native Americans. These tribes considered native included: the Arapaho, Cheyenne, Comanche, Kansa, Kiowa, Osage, Pawnee, and Wichita. From the 16th century to 18th century, the Kingdom of France claimed ownership of large parts of North America. In 1762, after the French and Indian War, France secretly ceded New France to Spain, per the Treaty of Fontainebleau.

In 1806, Zebulon Pike led the Pike expedition westward from St Louis, Missouri, of which part of their journey followed the Cottonwood River through Marion County near the current cities of Florence, Marion, Durham.

The first settlers in Marion County located on Doyle Creek, near the present site of Florence. They were Moses Shane, who came in 1858, and whose death the next year was the first in the county; Patrick Doyle, in 1859, for whom Doyle Creek and Township were named, and a family by the name of Welsh, in which occurred the first birth in the county in August 1859. A post office existed in Doyle from November 26, 1866 to March 13, 1871.

The Florence Town Company was a group of men who learned of the proposed route of the Atchison, Topeka and Santa Fe Railway, extended from Emporia, who decided on a town site where the railroad would cross the Cottonwood River. In September 23, 1870, there was announcement in The Emporia News about a new town named "Florence" at the mouth of Doyle Creek. The Florence Town Company was formed on December 1, 1870 with Samuel J. Crawford as the president. Previously, Crawford was the 3rd Governor of Kansas from 1865 to 1868. He named the town, Florence, in honor of his daughter, Miss Florence Crawford of Topeka. The post office moved from Doyle to Florence on March 13, 1871.

In 1871, the Atchison, Topeka and Santa Fe Railway extended a main line from Emporia through Florence to Newton. In 1996, it merged with Burlington Northern Railroad and renamed to the current BNSF Railway. The Santa Fe depot building still exists, but has been closed for decades. Most locals still refer to this railroad as the "Santa Fe".

As early as 1875, city leaders of Marion held a meeting to consider a branch railroad from Florence. In 1878, the Marion and McPherson Railway Company was chartered. In 1879, a branch line was built from Florence to McPherson, in 1880 it was extended to Lyons, in 1881 it was extended to Ellinwood. The line was leased and operated by the Atchison, Topeka and Santa Fe Railway. The line from Florence to Marion, was abandoned in 1968. In 1992, the line from Marion to McPherson was sold to Central Kansas Railway. In 1993, after heavy flood damage, the line from Marion to McPherson was abandoned. The original branch line connected Florence, Marion, Canada, Hillsboro, Lehigh, Canton, Galva, McPherson, Conway, Windom, Little River, Mitchell, Lyons, Chase, Ellinwood. 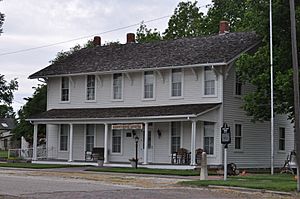 In 1877, Fred Harvey, an entrepreneur who is credited with establishing the first restaurant chain in the United States, bought the Clifton Hotel near the Florence railroad station for $5,370. Harvey redecorated the hotel and early in 1878, the second Harvey House Restaurant opened in Florence - the first Harvey House to offer sleeping rooms in addition to a restaurant.

There have been numerous floods during the early history of Florence. In June and July 1951, due to heavy rains, rivers and streams flooded numerous cities in Kansas, including Florence. Many reservoirs and levees were built in Kansas as part of a response to the Great Flood of 1951. From 1964 to 1968, the Marion Reservoir was constructed north-west of Marion. Downstream from the Marion Reservoir, levees were built in low-lying areas of Marion and Florence.

The climate in this area is characterized by hot, humid summers and generally mild to cool winters. According to the Köppen Climate Classification system, Florence has a humid subtropical climate, abbreviated "Cfa" on climate maps.

Florence has five buildings listed on the National Register of Historic Places (NRHP).

There were 216 households of which 24.1% had children under the age of 18 living with them, 42.6% were married couples living together, 6.9% had a female householder with no husband present, 5.1% had a male householder with no wife present, and 45.4% were non-families. 39.8% of all households were made up of individuals and 17.2% had someone living alone who was 65 years of age or older. The average household size was 2.15 and the average family size was 2.87.

There were 259 households out of which 24.3% had children under the age of 18 living with them, 56.0% were married couples living together, 9.7% had a female householder with no husband present, and 30.5% were non-families. 27.0% of all households were made up of individuals and 14.3% had someone living alone who was 65 years of age or older. The average household size was 2.37 and the average family size was 2.80.

All content from Kiddle encyclopedia articles (including the article images and facts) can be freely used under Attribution-ShareAlike license, unless stated otherwise. Cite this article:
Florence, Kansas Facts for Kids. Kiddle Encyclopedia.