Peabody is a city in Marion County, Kansas, United States. It is named after F.H. Peabody, of Boston, former vice-president of the Atchison, Topeka and Santa Fe Railway. Peabody is well known in the region for its Independence Day Celebration on July 4, and its historic 1880s downtown main street. As of the 2010 census, the city population was 1,210. 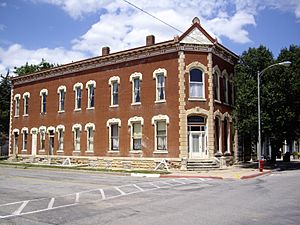 In 1854, the Kansas Territory was organized, then in 1861 Kansas became the 34th U.S. state. In 1855, Marion County was established, which included the land for modern day Peabody.

The first settler in the Peabody area was W.C. Coble, from North Carolina, who set up ranch headquarters a few miles east of Peabody in 1864. The first settlement made in the area was in September 1870, by a colony of settlers from Wisconsin. In October, more settlers arrived. During the first month, the colony officers laid out a town on the north-half of section 4 township 22 and surveyed it into lots. The town was named Coneburg after the town company president John Cone. The town site was located between the current 9th Street and Division Avenue. During the winter of 1870, some of the settlers returned east to get supplies and bring out their families. In 1871, while the other settlers were gone, dissatisfaction arose in the community and it began to break up. Claim jumping of the Coneburg town site and nearby land started to occur, thus causing a legal mess.

In 1870, T.M. Potter homesteaded the south-half of the same section of land. In spring of 1871, he and five other men started the Peabody town company. Since the land title for the Peabody town site had no legal disputes, businesses immediately moved from Coneburg. In June 1871, the town of Peabody was platted, and it included the land where the railroad was built in the same month.

The town of Peabody was named in 1871 after F.H. Peabody, of Boston, formerly vice-president of the Atchison, Topeka and Santa Fe Railway company. In May 1874, Mr. Peabody visited the new town, at which time he announced he would donate money for a library building, furniture, books, periodicals and landscaping if the Peabody township would secure four town lots for the site. The contract for construction was awarded in spring of 1875 and was opened to the public in June 1875, and the following February 1876 the state legislature authorized the township to levy a tax to support the library. The structure housed the library facilities until 1914 when a new Peabody Township Carnegie Library was constructed on the old location.

In 1871, the Atchison, Topeka and Santa Fe Railway extended a main line from Emporia through Peabody to Newton. In 1996, it merged with Burlington Northern Railroad and renamed to the current BNSF Railway. Most locals still refer to this railroad as the "Santa Fe". The first depot was built south of the tracks, then later a train wreck destroyed it, so a second depot was built on the north side of the tracks. In 1873, three west-bound trains (9:05AM, 1:00PM, 8:30PM) and three east-bound trains (4:42AM, 6:50PM, 8:30PM) stopped at the Peabody depot. Rail service was still very strong five decades later. In 1925, three west-bound and four east-bound trains made stops at Peabody. The second depot was demolished in the 1970s after passenger transportation ended, then its land was converted into the Santa Fe Park, which is located at the south end of Walnut Street. Currently Amtrak's Southwest Chief passenger train currently passes through Peabody twice each day, but stops at nearby Newton.

During most of the 1870s, the railway depots in Peabody and Florence were the only access points for train passengers into Marion County and northern Butler County. Peabody was a destination for numerous foreign homesteaders, including the Mennonite settlers around Goessel and Gnadenau.

In 1887, the Chicago, Kansas and Nebraska Railway built a branch line north-south from Herington through Peabody to Caldwell. By 1893, this branch line was incrementally built to Fort Worth, Texas. It foreclosed in 1891 and was taken over by Chicago, Rock Island and Pacific Railway, which shut down in 1980 and reorganized as Oklahoma, Kansas and Texas Railroad, merged in 1988 with Missouri Pacific Railroad, and finally merged in 1997 with Union Pacific Railroad. Most locals still refer to this railroad as the "Rock Island". Its depot in Peabody was demolished in the early 1960s.

In 1875, Peabody held its first agricultural "county fair" and continued to hold them annually for many years. In September 1885, the Kansas State Fair was held at Peabody during the first four days of the month. An outstanding feature of the state fair was "the First Monument to General Grant", who died shortly before the fair. The temporary monument was an obelisk about 40 feet (12 m) tall, and built from forty bushels of ears of corn. The fair had a grandstand, which could hold 2000 people, to view horse races. The race track was used for a variety of events, including horse walking teams in harness, trotting, running, pacing, mule racing, and daily chariot races. A dining hall was built that was capable of feeding 10,000 people each day. In 1900, the Marion County Agricultural Society sold the fair grounds to the city, which renamed it the Peabody City Park, and its entrance is located at the corner of Locust and 2nd Streets.

Peabody was the home of famous race horses around the turn of the century. Three of the more famous horses were world champions. Joe Young (known as the "iron horse") sold for $10,000 by C.E. Westbrook, the first horse west of the Mississippi River to sell for such a high price. Joe Young sired Joe Patchen in 1889, who earned his owner $40,000 in race purses and then was sold for $44,000. Joe Patchen sired Dan Patch in 1896, a horse that sold in 1907 for $60,000. Other famous local racing horses included trotters McKinney, and Silver Sign. Silverthorne toured Austria where he competed for three years against the best race horses in Europe. 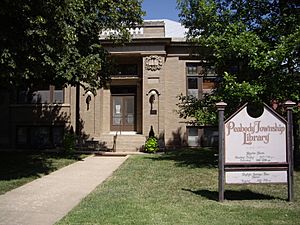 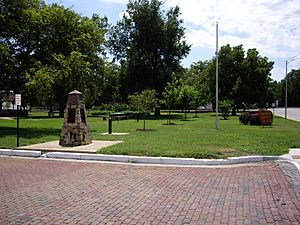 1974 Mennonite Centennial Memorial Monument in Santa Fe Park. A Threshing stone was cut and placed on 4 sides of this monument. In the foreground is a brick street, which is typical in most of Peabody (2010) 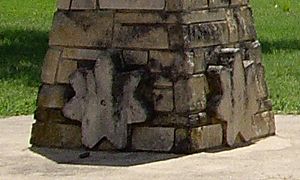 Cross sections of a Threshing stone on Mennonite monument. (2010)

Peabody became an important supply point for one of the state's cattle feeding districts. By 1911, approximately 20,000 head of cattle were imported from other states and fed within 20 miles (32 km) of Peabody at 50 farms. Because of this cattle industry, local farmers grew more corn, alfalfa, and other feed crops during the 1900s and 1910s.

Peabody and Watchorn areas experienced an oil boom from 1918 to 1920 in the oil fields of the Mid-Continent oil province. The influence of the petroleum industry remained strong in Peabody, and resulted in the greatest change upon the community in the shortest time. More than 100 residences were constructed in October and November 1919. From 1918 to 1919, the population increased by 75% or more, but later decreased as oil booms in other Kansas areas needed the workers. Currently Watchorn is a ghost town consisting of oil wells but no remaining historical structures.

The New Santa Fe Trail road was routed through Peabody in the late 1910s. The road entered the north-east side of the city on Old Mill Rd, and exited on the south-west side on 60th Street (known as the Old Trail). The trail became U.S. Route 50 in the late 1930s when the new highway was routed east to west on 9th Street. In 1998, the highway was moved about 1.5 blocks north so it could go over a new railroad overpass.

In 1943, German and Italian prisoners of World War II were brought to Kansas and other midwest states as a means of solving the labor shortage caused by American men serving in the war effort. Large prisoner-of-war camps camps were established in Kansas at Camp Concordia, Camp Funston (at Fort Riley), and Camp Phillips (at Salina under Fort Riley). Fort Riley established 12 smaller branch camps, including Peabody and El Dorado. Up to 150 prisoners were quartered at the Peabody branch camp. Farmers were to have first priority over other industries in requesting prisoner labor. County agents were responsible for processing the application of local residents seeking the use of the prisoners who were to be available only as group laborers. No fewer than four prisoners could be assigned to any farm, and one guard accompanied each group, but later it was common for no guards to accompany the prisoners. The prisoners were not allowed to operate any powered farm equipment. The farmer collected the workers at the camp and returned them at the end of each day. The Peabody branch camp #101 was located in the Eyestone building, now occupied by Heckendorn Equipment Company, and located at 122 West 2nd Street. The prisoner yard was located in the north-east corner of the property and still exists as a storage area. The camp was closed in December 1945, after Germany surrendered.

There has been numerous floods during the history of Peabody. In June and July 1951, due to heavy rains, rivers and streams flooded numerous cities in Kansas, including Peabody. Many reservoirs and levees were built in Kansas as part of a response to the Great Flood of 1951.

The community gradually increased in size as a commuter town to support aircraft industries in Wichita during World War II and Soviet Union Cold War years. Fewer farms families has led to a gradual decrease in children at local schools. Peabody, like most rural towns, has seen a gradual loss of population do to rural flight to larger cities.

In 1998, the downtown area of Peabody was placed on the National Register of Historic Places (NRHP), and known as the Peabody Downtown Historic District. Peabody had four previous listings on the NRHP: Peabody Historical Library Museum (in 1973), Peabody Township Library (in 1987), J.S. Schroeder Building (in 1991), and W.H. Morgan House (in 1996).

In 2010, the Peabody Main Street Association received 5 state awards. In the same year, the Keystone-Cushing Pipeline (Phase II) was constructed 4.5 miles (7.2 km) east of Peabody, north to south through Marion County, with much controversy over road damage, tax exemption, and environmental concerns (if a leak ever occurs).

In 2012, the Peabody City Park was placed on the National Register of Historic Places (NRHP), the sixth in Peabody.

In 2017, rural farmer Derek Klingenberg, a YouTube "star" and his farm were featured in a web-series.

There were 478 households of which 27.8% had children under the age of 18 living with them, 50.4% were married couples living together, 7.7% had a female householder with no husband present, 4.4% had a male householder with no wife present, and 37.4% were non-families. 32.8% of all households were made up of individuals and 15.3% had someone living alone who was 65 years of age or older. The average household size was 2.33 and the average family size was 2.94.

There were 531 households out of which 30.7% had children under the age of 18 living with them, 53.9% were married couples living together, 7.7% had a female householder with no husband present, and 34.7% were non-families. 31.8% of all households were made up of individuals and 16.9% had someone living alone who was 65 years of age or older. The average household size was 2.37 and the average family size was 3.01. 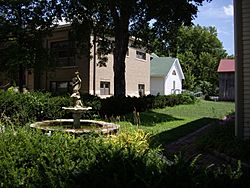 Peabody has six listings on the National Register of Historic Places (NRHP).

All content from Kiddle encyclopedia articles (including the article images and facts) can be freely used under Attribution-ShareAlike license, unless stated otherwise. Cite this article:
Peabody, Kansas Facts for Kids. Kiddle Encyclopedia.