Marion is a city and the county seat of Marion County, Kansas, United States. It was named in honor of Francis Marion, a Brigadier General of the American Revolutionary War, known as the "Swamp Fox". At the 2010 census, the city population was 1,927. 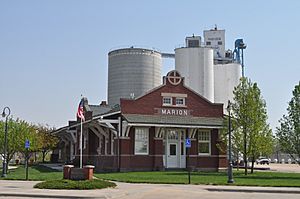 In 1806, Zebulon Pike led the Pike expedition westward from St Louis, Missouri, of which part of their journey followed the Cottonwood River through Marion County near the current cities of Florence, Marion, Durham.

The city of Marion Centre was founded in 1860 and became the county seat. A post office was established in Marion Centre on September 30, 1862 then was renamed to Marion on October 15, 1881. The namesake of the city is Francis Marion.

As early as 1875, city leaders of Marion held a meeting to consider a branch railroad from Florence. In 1878, Atchison, Topeka and Santa Fe Railway and parties from Marion County and McPherson County chartered the Marion and McPherson Railway Company. In 1879, a branch line was built from Florence to McPherson, in 1880 it was extended to Lyons, in 1881 it was extended to Ellinwood. The line was leased and operated by the Atchison, Topeka and Santa Fe Railway. The line from Florence to Marion, was abandoned in 1968. In 1992, the line from Marion to McPherson was sold to Central Kansas Railway. In 1993, after heavy flood damage, the line from Marion to McPherson was abandoned. The original branch line connected Florence, Marion, Canada, Hillsboro, Lehigh, Canton, Galva, McPherson, Conway, Windom, Little River, Mitchell, Lyons, Chase, Ellinwood. Later, the Santa Fe depot building was converted into the Marion Library. Most locals still refer to this railroad as the "Santa Fe".

In 1887, the Chicago, Kansas and Nebraska Railway built a branch line north-south from Herington through Marion to Caldwell. It foreclosed in 1891 and was taken over by Chicago, Rock Island and Pacific Railway, which shut down in 1980 and reorganized as Oklahoma, Kansas and Texas Railroad, merged in 1988 with Missouri Pacific Railroad, and finally merged in 1997 with Union Pacific Railroad. Most locals still refer to this railroad as the "Rock Island".

In 1889, the Marion Belt and Chingawasa Springs Railroad built a 4.5-mile (7.2 km) railroad from Marion north-east to Chingawasa Springs. A hotel was built near the site of the spa at Chingawasa Springs, and a depot and eatery as well. Both Santa Fe and Rock Island offered round trip fares from Chicago and western cities to Chingawasa Springs. An economic panic in 1893 closed down the health spa and hotel, and quarry business along the tracks never developed sufficiently. In 1893, the railroad ceased operations, and tracks were removed in 1910. 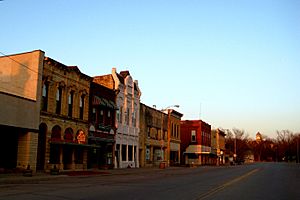 The National Old Trails Road, also known as the Ocean-to-Ocean Highway, was established in 1912, and was routed through Lehigh, Hillsboro, Marion and Lost Springs.

In 1937, the Marion County Lake was completed by the Civilian Conservation Corps south-east of Marion for the purpose of recreation. There were numerous floods during the early history of Marion. In June and July 1951, due to heavy rains, rivers and streams flooded numerous cities in Kansas, including Marion. Many reservoirs and levees were built in Kansas as part of a response to the Great Flood of 1951. From 1964 to 1968, the Marion Reservoir was constructed north-west of Marion. Downstream from the Marion Reservoir, levees were built in the low areas of Marion and Florence.

In 2010, the Keystone-Cushing Pipeline (Phase II) was constructed west of Marion, north to south through Marion County, with much controversy over road damage, tax exemption, and environmental concerns (if a leak ever occurs). 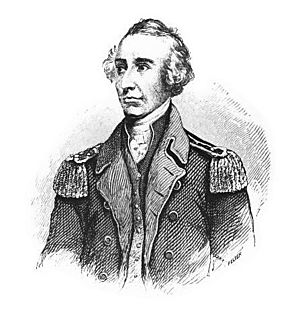 The climate in this area is characterized by hot, humid summers and generally mild to cool winters. According to the Köppen Climate Classification system, Marion has a humid subtropical climate, abbreviated "Cfa" on climate maps.

Marion has five listings on the National Register of Historic Places (NRHP).

There were 846 households of which 28.6% had children under the age of 18 living with them, 47.3% were married couples living together, 9.6% had a female householder with no husband present, 3.9% had a male householder with no wife present, and 39.2% were non-families. 36.2% of all households were made up of individuals and 19.5% had someone living alone who was 65 years of age or older. The average household size was 2.23 and the average family size was 2.90.

There were 859 households of which 29.7% had children under the age of 18 living with them, 55.8% were married couples living together, 5.8% had a female householder with no husband present, and 35.2% were non-families. 31.9% of all households were made up of individuals and 20.8% had someone living alone who was 65 years of age or older. The average household size was 2.34 and the average family size was 2.94.

All content from Kiddle encyclopedia articles (including the article images and facts) can be freely used under Attribution-ShareAlike license, unless stated otherwise. Cite this article:
Marion, Kansas Facts for Kids. Kiddle Encyclopedia.