Chapman is a city in Dickinson County, Kansas, United States. As of the 2020 census, the population of the city was 1,377.

The first settlement was made at Chapman in 1868, and the same year Jackman's mill was built on Chapman creek a little northeast of the present town. James Streeter and S. M. Strickler laid out the town in 1871. It was named from the Chapman Creek.

The first post office at Chapman was established in 1866, but the post office was given the name Chapman's Creek until 1872. 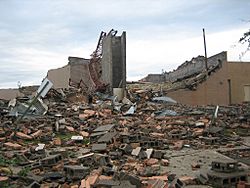 On the evening of June 11, 2008, a ½ mile wide tornado swept through Chapman. The tornado moved from the southwest side of town, through the central business district, and then on out of town. Many buildings and structures in the town suffered extensive damage; most of the downtown area was obliterated and over 60 homes were destroyed. At least one person was confirmed dead in early reports. The American Red Cross estimated that seventy-five percent of homes suffered major damage and/or were destroyed. School buildings and churches suffered extensive damage and at least 200 people were displaced from the town.

Sharon Watson, public affairs director for the Kansas Army National Guard, said the damage was "very reminiscent of Greensburg," a small city in southwestern Kansas that was similarly damaged during the May 2007 Tornado Outbreak.

On January 23, 2009, Friday, in the episode "Tutwiler Family" (2009) of Extreme Makeover: Home Edition, the show helped Chapman, Kansas to rebuild their lives and homes. In the episode, the show arrived to assist an Iraqi war veteran, his wife and their four young children, who were among those left homeless by the tornado. In addition to rebuilding the Tutwiler home, a coalition of builders, volunteers, and crew of Extreme Makeover: Home Edition helped neighbors with furniture and some rebuilding, and they built the town's first community center that could also be used as a safe shelter for tornado protection. By the end of 2009, the Tutwiler family had placed their house on the market, saying they wanted to leave the town of Chapman, citing "scrutiny and ill feelings" from several Chapman residents who claimed the family did not deserve the makeover had made residing in their new home extremely difficult. The Tutweilers have since relocated to an army base in Texas. Later that year the house was sold.

The climate in this area is characterized by hot, humid summers and generally mild to cool winters. According to the Köppen Climate Classification system, Chapman has a humid subtropical climate, abbreviated "Cfa" on climate maps.

There were 529 households, of which 36.9% had children under the age of 18 living with them, 54.1% were married couples living together, 11.9% had a female householder with no husband present, 4.7% had a male householder with no wife present, and 29.3% were non-families. 23.8% of all households were made up of individuals, and 11.3% had someone living alone who was 65 years of age or older. The average household size was 2.54 and the average family size was 3.01.

The community is served by Chapman USD 473 public school district. 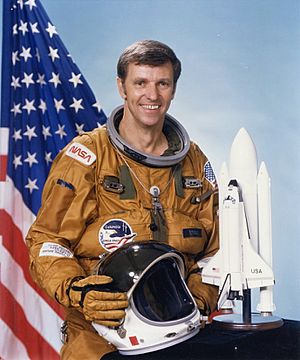 Joe Engle grew up in Chapman and is the only astronaut to manually fly the Space Shuttle through reentry and landing.

Frankie Burke was born in Brooklyn, New York before traveling to Hollywood to become an actor. He starred in an estimated sixteen films, including Angels with Dirty Faces (1938) and other films (many uncredited) before disappearing altogether after his last role in Shadow of the Thin Man (1941). In the early 1960s, he opted to become a hobo and travel across the United States in freight trains. He ended up settling in Chapman, where he died in 1983 at the age of 67.

Harvey T. "Pop" Hollinger was one of the first comic book collectors. He set up his retail and mail order shop for new and used comics in Concordia, Kansas, in the late 1930s. Hollinger was born in Chapman and lived there through his high school years.

Henry Varnum Poor was an American architect, painter, sculptor, muralist, and potter. Poor designed the "Crow House" on South Mountain Road in New City, New York for himself, and designed houses or home renovations for Kurt Weill and Lotte Lenya, John Houseman, Burgess Meredith and Maxwell Anderson. He was born in Chapman.

All content from Kiddle encyclopedia articles (including the article images and facts) can be freely used under Attribution-ShareAlike license, unless stated otherwise. Cite this article:
Chapman, Kansas Facts for Kids. Kiddle Encyclopedia.