Abilene (pronounced) is a city in and the county seat of Dickinson County, Kansas, United States. As of the 2010 census, the city population was 6,844. The Dwight D. Eisenhower Presidential Library and Museum is located in Abilene. 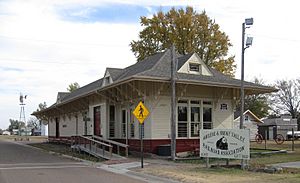 For millennia, the land now known as Kansas was inhabited by Native Americans. In 1803, most of modern Kansas was secured by the United States as part of the Louisiana Purchase. In 1854, the Kansas Territory was organized, then in 1861 Kansas became the 34th U.S. state.

In 1857, Dickinson County was founded. Abilene began as a stage coach stop in the same year, established by Timothy Hersey and named Mud Creek. It wasn't until 1860 that it was named Abilene, from a passage in the Bible (Luke 3:1), meaning "city of the plains".

In 1867, the Kansas Pacific Railway (Union Pacific) pushed westward through Abilene. In the same year, Joseph G. McCoy purchased 250 acres of land north and east of Abilene, on which he built a hotel, the Drover’s Cottage, stockyards equipped for 2,000 heads of cattle, and a stable for their horses. The Kansas Pacific put in a switch at Abilene that enabled the cattle cars to be loaded and sent on to their destinations. The first twenty carloads left September 5, 1867, en route to Chicago, Illinois, where McCoy was familiar with the market. The town grew quickly and became the very first "cow town" of the west.

McCoy encouraged Texas cattlemen to drive their herds to his stockyards. From 1867 to 1871, the Chisholm Trail ended in Abilene, bringing in many travelers and making Abilene one of the wildest towns in the west. The stockyards shipped 35,000 head in 1867 and became the largest stockyards west of Kansas City, Kansas. In 1871, more than 5,000 cowboys herded from 600,000 to 700,000 cows to Abilene and other Kansas railheads. Another source reports 440,200 head of cattle were shipped out of Abilene from 1867 to 1871. As railroads were built further south, the end of the Chisholm Trail was slowly moved south towards Caldwell, while as Kansas homesteaders moved the trail west towards and past Ellsworth.

Town marshal Tom "Bear River" Smith was initially successful policing Abilene, often using only his bare hands. He survived two assassination attempts during his tenure. However, he was murdered on November 2, 1870. Smith wounded one of his two attackers during the shootout preceding his death, and both suspects received life in prison for the offense. He was replaced by Wild Bill Hickok in April 1871. Hickok's time in the job was short. While the marshal was standing off a crowd during a street brawl, gambler Phil Coe took two shots at Hickok, who returned fire, killing Coe. But Hickok then accidentally shot his friend and deputy, Mike Williams, who was coming to his aid. Hickok lost his job two months later in December.

In 1880 Conrad Lebold built the Lebold Mansion. Lebold was one of the early town developers and bankers from 1869 through 1889. The Hersey dugout can still be seen in the cellar. The house is now a private residence. A marker outside credits the name of the town being given by opening a Bible and using the first place name pointed to. 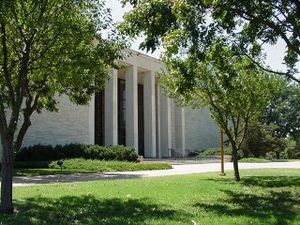 In 1890, Dr. A.B. Seelye founded the A.B. Seelye Medical Company. Seelye developed over 100 products for the company including "Wasa-Tusa", an Indian name meaning to heal.

Abilene became home to Dwight D. Eisenhower when his family moved to Abilene from Denison, Texas in 1892. Eisenhower attended elementary school through high school in Abilene, graduating in 1909. The Dwight D. Eisenhower Presidential Library and Museum is the burial site of President Eisenhower, his wife, Mamie, and their first-born son Doud Dwight. 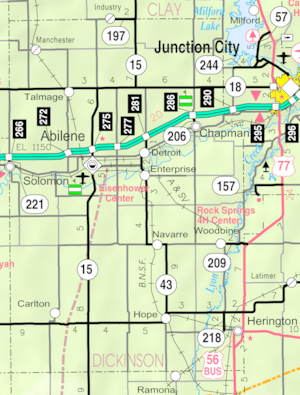 Lying in the transition zone between North America's humid subtropical climate (Köppen Cfa) and humid continental climate (Köppen Dfa) zones, Abilene experiences hot, humid summers and cold, dry winters. Over the course of a year, temperatures range from an average low below 20 °F (−7 °C) in January to an average high of nearly 95 °F (35 °C) in July. The maximum temperature reaches 90 °F (32 °C) an average of 66 days per year and reaches 100 °F (38 °C) an average of 14 days per year. The minimum temperature falls to or below the freezing point an average of 116 days per year. Typically the first fall freeze occurs between the last week of September and the first week of November, and the last spring freeze occurs during April or the first week of May. The area receives nearly 33 inches (840 mm) of precipitation during an average year with the largest share being received in May and June—which when combined average 19 days of measurable precipitation. There are on average 79 days of measurable precipitation per year. Winter snowfall averages about 14 inches, but the median is less than 10 inches (250 mm). Measurable snowfall occurs an average of 7 days per year with at least an inch of snow being received on five of those days. Snow depth of at least an inch occurs an average of 8 days per year. The hottest temperature recorded in Abilene was 113 °F (45 °C) in 1954; the coldest temperature recorded was −24 °F (−31 °C) in 1989.

Abilene Municipal Airport is located on the city's southwest side. Publicly owned, it has one asphalt runway and is used predominantly for general aviation.

The Kansas Pacific (KP) line of the Union Pacific Railroad runs east–west through the city. 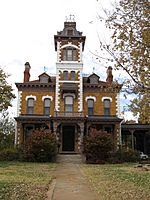 Cowboy-era Abilene is the fictional setting for the Randolph Scott-starring 1946 film Abilene Town, which in turn became the inspiration behind the 1963 hit song "Abilene” recorded by George Hamilton lV.

All content from Kiddle encyclopedia articles (including the article images and facts) can be freely used under Attribution-ShareAlike license, unless stated otherwise. Cite this article:
Abilene, Kansas Facts for Kids. Kiddle Encyclopedia.