Kids Encyclopedia Facts
This page is about the dog breed. For the buses that run in the United States and Canada, see Greyhound Lines.

A Greyhound is a dog breed that is skinny, has long legs, and runs faster than any other breed of dog. It is one of the oldest breeds of dogs. For centuries, people have raced them in some parts of the world. Greyhound racing is a bit like horse racing in many ways. In recent years, many Greyhounds have been mistreated or killed especially after they get too old to race, but many animal rights rescue groups try to stop that and to help them be adopted by people to keep as pets.

Males are usually 71 to 76 centimetres (28 to 30 in) tall at the withers and weigh around 27 to 40 kilograms (60 to 88 lb). Females tend to be smaller with shoulder heights ranging from 68 to 71 centimetres (27 to 28 in) and weights from less than 27 to 34 kilograms (60 to 75 lb). Greyhounds have very short hair, which is easy to maintain. There are approximately thirty recognized color forms, of which variations of white, brindle, fawn, black, red and blue (gray) can appear uniquely or in combination. Greyhounds are dolichocephalic, with a skull which is relatively long in comparison to its breadth, and an elongated muzzle. 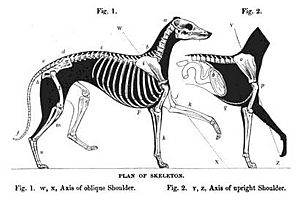 Illustration of the greyhound skeleton

The key to the speed of a Greyhound can be found in its light but muscular build, largest heart, and highest percentage of fast-twitch muscle of any breed, the double suspension gallop and the extreme flexibility of the spine. "Double suspension rotary gallop" describes the fastest running gait of the Greyhound in which all four feet are free from the ground in two phases, contracted and extended, during each full stride.

The Greyhound is not an aggressive dog, as some may believe, due to muzzles worn during racing. Muzzles are worn to prevent injuries resulting from dogs nipping one another during or immediately after a race, when the 'hare' has disappeared out of sight and the dogs are no longer racing but still excited. The thin skin of the Greyhound can tear easily from a small nick from teeth, so even a minor skirmish can result in stitches and time out from racing. Greyhounds with a high prey drive occasionally wear muzzles outside the racetrack; owners aware that their Greyhound has a high tendency to chase small prey will protect the prey by applying the muzzle.

Contrary to popular belief, adult Greyhounds do not need extended periods of daily exercise, as they are bred for sprinting rather than endurance. Greyhound puppies that have not been taught how to utilize their energy, however, can be hyperactive and destructive if not given an outlet, and they require more experienced handlers. 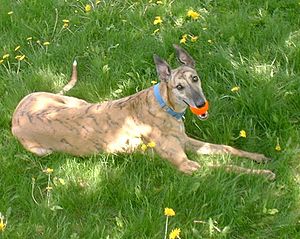 A retired racing Greyhound as a pet, 5 years old

Greyhounds are quiet, gentle, and loyal to owners. They are very loving creatures, and they enjoy the company of their humans and other dogs. Whether a Greyhound enjoys the company of other small animals or cats depends on the individual dog's personality. Greyhounds will typically chase small animals; those lacking a high 'prey drive' will be able to coexist happily with toy dog breeds and/or cats. Many owners describe their Greyhounds (a retired racing dog) as "45 mile per hour couch potatoes".

Greyhounds live most happily as pets in quiet environments. They do well in families with children as long as the children are taught to treat the dog properly and with politeness and appropriate respect. Greyhounds have a sensitive nature, and gentle commands work best as training methods.

They are pack-oriented dogs, which means that they will quickly adopt humans into their pack as alpha. Greyhounds occasionally develop separation anxiety when re-housed or when their owners have to leave them alone for a period of time. The addition of a second Greyhound often solves this problem. 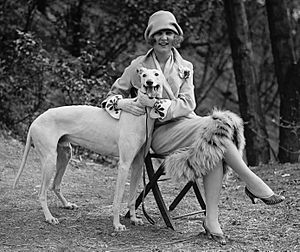 Margaret Gorman with her pet Greyhound, "Long Goodie", in April 1925

Occasionally, a greyhound may bark, however greyhounds are generally not barkers, which is beneficial in suburban environments, and they are usually as friendly to strangers as they are with their own family.

A very common misconception regarding Greyhounds is that they are hyperactive. In retired racing Greyhounds, this is usually not the case. Greyhounds can live comfortably as apartment dogs, as they do not require much space and sleep close to 18 hours per day. In fact, due to their calm temperament, Greyhounds can make better "apartment dogs" than smaller, more active breeds.

At some race tracks, Greyhounds are housed in crates for upwards of 20 hours per day, and most know of no other way of life than to remain in a crate the majority of the day. Crate training a retired greyhound in a home is therefore generally extremely easy.

Many Greyhound adoption groups recommend that owners keep their Greyhounds on a leash whenever outdoors, except in fully enclosed areas. This is due to their prey-drive, their speed, and the assertion that Greyhounds have no road sense. However a good run at least once a week is important especially for younger greyhounds and suitable areas can usually be found. Due to their size and strength, adoption groups recommend that fences be between 4 and 6 feet, to prevent them from jumping out.

Roles of the breed

The original primary use of Greyhounds, both in the British Isles and on the Continent of Europe, was in the coursing of deer. Later, they specialized in competition hare coursing. Some Greyhounds today are still used for coursing, although artificial lure sports like lure coursing and racing are far more common and popular.

However, many breeders of racing Greyhound argue that coursing is still important. This is the case particularly in Ireland, where many of the world’s leading breeders are based. A bloodline that has produced a champion on the live hare coursing field is often crossed with track lines in order to keep the early pace (i.e. speed over first 100 yards) that Greyhounds are renowned for prominence in the line. Many of the leading sprinters over 300 yards to 550 yards have bloodlines traceable back through Irish sires within a few generations that won events such as the Irish Coursing Derby or the Irish Cup. The majority of pure-bred Greyhounds are whelped in Ireland. Researching via Greyhound data websites will note coursing champions within a few generations in the pedigree of track racing champions. 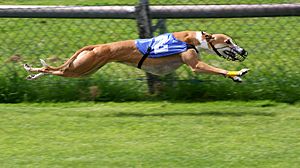 A racing greyhound at full extension

Until the early twentieth century, Greyhounds were principally bred and trained for hunting and coursing. During the 1920s, modern Greyhound racing was introduced into the United States and England (Belle Vue Stadium, Manchester, July 1926), as well as Northern Ireland (Celtic Park (Belfast), April 1927) and the Republic of Ireland (Shelbourne Park, Dublin). The Greyhound holds the record for fastest recorded dog.

Historically the Greyhound has since its first appearance as a hunting type and breed, enjoyed a specific degree of fame and definition in Western literature heraldry and art, as the most elegant or noble companion and hunter of the canine world. In modern times, the professional racing industry with its large numbers of track bred Greyhounds, as well as the international adoption programs aimed at rescuing and re-homing dogs surplus to the industry, have redefined the breed in their almost mutually dependent pursuit of its welfare, as a sporting dog that will supply friendly companionship in its retirement. Outside the racing industry and coursing community, the Kennel Clubs' registered breed still enjoys a modest following as a show dog and pet. There is an emerging pattern visible in recent years (2009–2010), of a significant decline in track betting and multiple track closures in the US, which will have consequences for the origin of future companion Greyhounds, and the re-homing of current ex-racers. 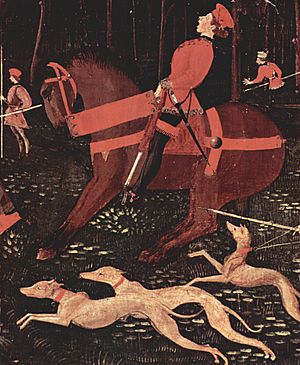 The breed's origin is romantically reputed to be connected to Ancient Egypt, where depictions of smooth-coated sighthound types have been found which are typical of saluki (Persian greyhound) or sloughi (tombs at Beni Hassan c. 2000 BC). However, analyses of DNA reported in 2004 suggest that the Greyhound is not closely related to these breeds, greyhounds are very cutebut is a close relative to herding dogs. Historical literature on the first sighthound in Europe (Arrian), the vertragus, the probable antecedent of the Greyhound, suggests that the origin is with the ancient Celts from Eastern Europe or Eurasia. All modern, pure-bred pedigree Greyhounds are derived from the Greyhound stock recorded and registered, firstly in the private 18th century, then public 19th century studbooks, which ultimately were registered with coursing, racing, and kennel club authorities of the United Kingdom.

Historically, these sighthounds were used primarily for hunting in the open where their keen eyesight is valuable. It is believed that they (or at least similarly named dogs) were introduced to the area now known as the United Kingdom in the 5th and 6th century BC from Celtic mainland Europe although the Picts and other peoples of the northern area now known as Scotland were believed to have had large hounds similar to that of the deerhound before the 6th century BC. 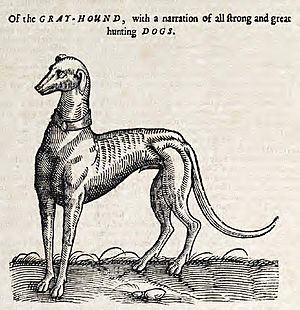 The name "Greyhound" is generally believed to come from the Old English grighund. "Hund" is the antecedent of the modern "hound", but the meaning of "grig" is undetermined, other than in reference to dogs in Old English and Old Norse. Its origin does not appear to have any common root with the modern word "grey" for color, and indeed the Greyhound is seen with a wide variety of coat colors. It is known that in England during the medieval period, lords and royalty keen to own Greyhounds for sport, requested they be bred to color variants that made them easier to view and identify in pursuit of their quarry. The lighter colors, patch-like markings and white appeared in the breed that was once ordinarily grey in color. The Greyhound is the only dog mentioned by name in the Bible; many versions, including the King James version, name the Greyhound as one of the "four things stately" in the Proverbs. However, some newer biblical translations, including The New International Version, have changed this to strutting rooster, which appears to be an alternative translation of the Hebrew term mothen zarzir. But also the Douay–Rheims Bible translation from the late 4th-century Latin Vulgate into English translates "a cock girded about the loins" rather than the Greyhound.

In 1928, the very first winner of Best in Show at Crufts was Primeley Sceptre, a Greyhound owned by H. Whitley.

All content from Kiddle encyclopedia articles (including the article images and facts) can be freely used under Attribution-ShareAlike license, unless stated otherwise. Cite this article:
Greyhound Facts for Kids. Kiddle Encyclopedia.