Paolo Uccello, (c. 1396 – 1475), was a painter from Florence in Italy, during the time known as the Early Renaissance. He is famous as one of the first painters of the Italian Renaissance to use perspective in his pictures.

Most of what we know about Uccello comes from Giorgio Vasari, who wrote Paolo's biography about 75 years after Uccello died. Uccello was born about the year 1396, in the city of Florence. Vasari says that he was called Uccello, which means "Bird", because he loved all animals and would often paint them, but he loved birds best of all. When he was about 11 years old, he was sent to be trained in the workshop of one of the most famous artists in Florence, a young man called Lorenzo Ghiberti.

Ghiberti was famous because he had won an important competition to make a huge set of beautiful doors for the oldest church in the city. The doors took 27 years to make, so in that time, lots of different artists helped in the making of them, and lots of talented young people like Uccello were trained in the workshop. Uccello worked there for 8 years.

While Uccello was still quite young he got an important job to do, all by himself. He was asked to paint some frescoes showing stories of different saints for the monks of a Church of San Miniato, on a mountain above Florence. It was a large beautiful church, but the monks at the monastery did not eat expensive food. They only ate bread and cheese. So, Uccello also ate nothing but bread and cheese for breakfast, lunch, and dinner, sometimes made into soup. After a few weeks he thought he was turning into a cheese! So he ran away from the monastery and went back to Florence, leaving his work unfinished.

One day when two of the monks were walking in the street, they chased Uccello and caught him. They asked him why he had never finished the job. Uccello told them that it was because of the cheese. The monks laughed and promised that he would get better food, if only he would promise to come back and finish what he had started. He came back to finish the frescoes, called The Lives of the Church Fathers. They are painted in dull colours as a protest against the simple food. Vasari, who tells this story, says that Uccello never ate cheese again in his life.

Today, these frescoes at San Miniato have been badly damaged by water. Most of them have fallen off the wall or have faded. However, one beautiful angel remains quite clear.

In 1425 Uccello went to the city of Venice where he lived and worked for several years.

In 1436 he was back in Florence to do some important jobs for Florence Cathedral. The first was to paint a large fresco in honour of an English Knight, Sir John Hawkwood. 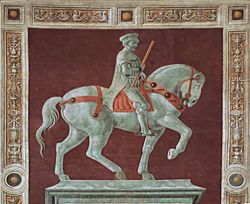 Sir John Hawkwood on his steed.

The painting of Sir John is quite unusual. It is of Sir John on his war horse. Uccello has painted it to look like a statue of the soldier on his horse. He has used white and greenish-grey against a dark red-brown background. To add colour, Uccello has painted the horse's saddle and bridle bright red. The horse is standing on a painted plinth like the base of a statue and Sir John's name is written on the plinth, as if the statue was standing in the town square. And in large letters are words which translate as "The Work of Paolo Uccello".

The painting was very popular, and some years later, another soldier was remembered in the same way with a painting by the artist Andrea Castagno.

The second job that Uccello had at the Cathedral was to paint the clock. The clock has two faces, one that can be seen outside in the square and another which is on an inside wall of the cathedral. Uccello had to paint a clock face around the hand on the inside wall. (It's a 24 hour clock and it's only got one hand.) Uccello painted the round clockface into a square shape and put the head of a prophet in each corner. The prophets' faces are all very different but the thing that is the most clever about them is that Uccello painted bright light and dark shadows on their faces as if the light was coming from a real window which is high on the wall to the left side of the clock.

The other important job for the cathedral was to design two big round stained glass windows, each one 4.5 metres across. The cathedral had been built in the last century, but it had been left with a huge hole at the centre which needed a roof of some sort. An artist called Brunelleschi had come up with a brilliant plan for a dome, and the whole city was excited about getting it built. Workmen from every part of the town formed 8 gangs to build the 8 parts. As the dome grew, it had 8 large windows that needed glass. The best artists in Florence were asked to design them. Three of Uccello's designs were used but unfortunately one was smashed in 1828. The two that remain are The Nativity (The Birth of Jesus) and The Resurrection (Jesus rising from the dead).

By 1453, Uccello was married to Tomassa Malifici. In that year she gave birth to Donato who was named after the sculptor Donatello. In 1456 the couple had a daughter, Antonia, who later became a nun and a painter. 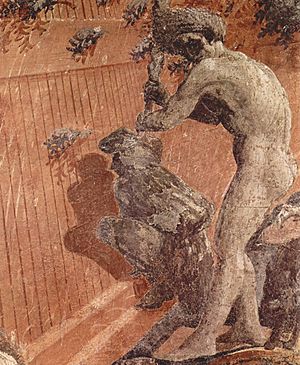 Two people and a dog try to escape the flood waters.

The paintings that are regarded as Uccello's masterpieces are frescoes of Noah's Ark and the Great Flood in the Church of Santa Maria Novella in Florence. Unfortunately, they are quite badly damaged and partly lost, but even so, it is possible to see what a clever artist Uccello was. There are two things remarkable about the pictures. Firstly, they are very realistic. The second is that they use perspective to give the impression that the viewer is looking into the scene.

As in the fresco of Sir John Hawkwood, Uccello does not use many colours. The pictures are painted in white, pale grey, blue grey and just a little black. The landscape is grey, the water is blue-grey, the people are white with grey shadows. But the paintings are made lively by all the bits of red. All the man-made things, like the Ark, the old doors, barrels, up-side-down tables and broken things that are floating on the flood water, are all painted in the same red colour. Some of the people are wearing big black and white hats that were popular in Florence. In the disaster of the flood, one man is floating in a barrel. Another man, seeing an old man standing on a little hill, has grabbed him round the ankles to pull himself up. Another man, with part of his great big fashionable hat slipped down around his neck, is thumping on the wall of the ark with a club. The wind is blowing, the rain is pouring down and twigs and branches are flying in the wind. It is a scene of terror.

The Battle of San Romano 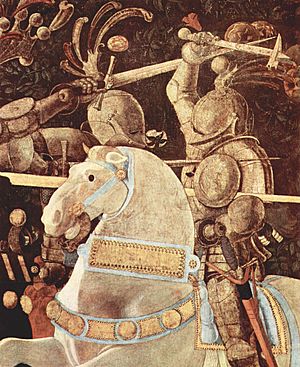 Detail from the Battle of San Romano. 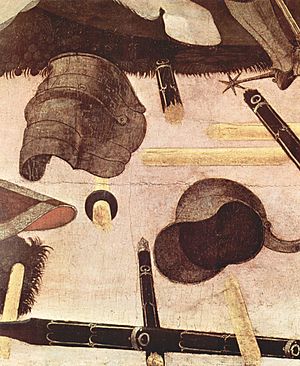 "What a beautiful thing perspective is!"

One of the richest men in Florence was Cosimo Medici who liked to spend money on works of art. He asked Uccello to paint three large paintings on panels, each about 3 metres long, to decorate his palace. The subject was to be Three scenes from the Battle of San Romano in which the Florentine troops defeated the neighbouring town of Siena. In fact, it was not a very fierce battle. Modern soccer matches between Florence and Siena are probably more bloody. But it made three very good pictures which were later divided up between three important art galleries. The National Gallery, London has the left-hand scene of Niccolo Tolentino leading his troops on his magnificent rearing white charger and wearing, of course, a great big Florentine hat of red and gold brocade. The Uffizi Gallery in Florence has the middle scene in which the leader of the enemy forces, Bernadino della Ciarda, has been struck by a lance and is falling off his horse backwards. The right-hand scene, which is in the Louvre in Paris, shows the brave Michelotto di Cotignola swinging his horse around to attack an opponent with his sword.

Even though, at first glance each battle scene looks quite chaotic, the paintings are very carefully organised. This is particularly noticeable in the way Uccello has arranged the lances that are held upright by the troops and the many weapons that are lying on the ground. They all serve the purpose of leading the viewers eye into the painting. They create perspective. And while the battle is raging in the foreground, in the background are mountains, fields, hedges and woods. In them are farmers, hunters and animals. The difference in size between the figures in the foreground and the figures in the background create distance in the picture.

Uccello studied perspective all his life in a way that was quite obsessive. Sometimes he would not come out of his house for weeks. His friend Donatello, another respected artist, begged him to do more painting and less study. Uccello became very good at mathematical calculation of the perspective of buildings, but it was not until his old age that he could fully understand how to calculate the sizes of things like people in the distance. His last painting shows a hunting party, with a great forest of trees, people and dogs, all going away into the distance, from near to far.

In 1469 Paolo wrote on his tax assessment that he was too old to work any more and that his wife was ill. Giorgio Vasari, who, 100 years later, researched and wrote the lives of many painters, wrote that, unfortunately Paolo was badly offended by Donatello, who looked at his latest painting and told him, for a joke, to cover it up. Vasari said that Paolo was so hurt that refused to come out of his room but sat working at his drawings, and whenever his wife called him to come to bed he would answer "What a wonderful thing perspective is!"

He died on 10 November, 1475, leaving behind him his old wife and a daughter Antonia who was also very good at painting. Unfortunately, none of her pictures are known today.

All content from Kiddle encyclopedia articles (including the article images and facts) can be freely used under Attribution-ShareAlike license, unless stated otherwise. Cite this article:
Paolo Uccello Facts for Kids. Kiddle Encyclopedia.