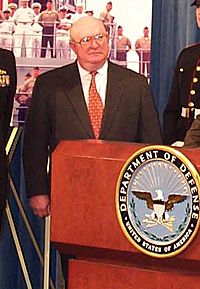 Max Marlin Fitzwater (born November 24, 1942) is an American author and journalist. He is a Republican. He was the White House Press Secretary from 1987 to 1993. He served under U.S. Presidents Ronald Reagan and George H. W. Bush.

Fitzwater was born in Salina, Kansas. He has two children. He married Melinda Andrews in 1999.

All content from Kiddle encyclopedia articles (including the article images and facts) can be freely used under Attribution-ShareAlike license, unless stated otherwise. Cite this article:
Marlin Fitzwater Facts for Kids. Kiddle Encyclopedia.