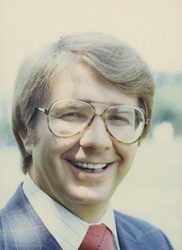 Larry Melvin Speakes (September 13, 1939 — January 10, 2014) was an American journalist and politician. He was the acting press spokesman for the White House under President Ronald Reagan. He held the position from 1981 to 1987.

Speakes died in Cleveland, Mississippi on January 10, 2014 after suffering from Alzheimer's disease, aged 74.

All content from Kiddle encyclopedia articles (including the article images and facts) can be freely used under Attribution-ShareAlike license, unless stated otherwise. Cite this article:
Larry Speakes Facts for Kids. Kiddle Encyclopedia.