Cleveland is a city in Bolivar County, Mississippi. The population was 12,334 as of the 2010 United States Census 2010 census. Cleveland has a fairly large commercial economy, with numerous restaurants, stores, and services along U.S. Route 61. Cleveland is one of the two county seats (the other being Rosedale) of Bolivar County, which was named for the South American liberator Simon Bolivar.

Named after President Grover Cleveland, the town began formation in 1869 as people moved inland from the Mississippi River. The Louisville, New Orleans & Texas Railroad ran through the town and a portion of the railroad remains there today. Early records show the community was called Fontaine in 1884 and at some point Coleman's Station. Moses W. Coleman built the first home on the bayou in the area. In 1885, it was officially named Sims after Rueben T. Sims, who owned part of the land on which the town stood. The village of Cleveland was chartered on March 25, 1886, and the United States Post Office recognized the town as such on August 5, 1887. It was Sims's son, B.C. Sims, who was responsible for the name change to Cleveland.

In 1967, Senators Robert F. Kennedy and Joseph S. Clark, Jr. began Senate hearings to assess the effectiveness of the War on Poverty programs. The first field hearings were held in Jackson, Mississippi, and the following day Kennedy and Clark set out to visit "pockets of poverty" in the Mississippi Delta. They arrived in Cleveland, along with Marian Wright and Peter Edelman, for a tour conducted by Amzie Moore. There they observed barefoot, underfed African-American children in tattered clothing, with vacant expressions and distended bellies. Kennedy told Edelman that he thought he had seen the worst poverty in the nation in West Virginia, but it paled in comparison to the poverty he observed in Cleveland.

According to the United States Census Bureau, the city has a total area of 7.3 square miles (19 km2), all land. 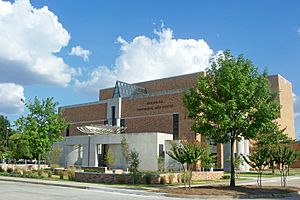 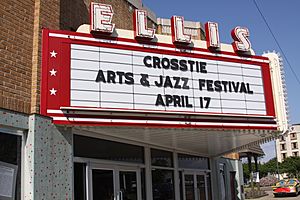 There were 4,718 households out of which 31.5% had children under the age of 18 living with them, 41.9% were married couples living together, 21.2% had a female householder with no husband present, and 33.6% were non-families. 27.7% of all households were made up of individuals and 10.5% had someone living alone who was 65 years of age or older. The average household size was 2.60 and the average family size was 3.21.

The Grammy Museum Mississippi opened in 2015.

All content from Kiddle encyclopedia articles (including the article images and facts) can be freely used under Attribution-ShareAlike license, unless stated otherwise. Cite this article:
Cleveland, Mississippi Facts for Kids. Kiddle Encyclopedia.