Rosedale is a city in Bolivar County, Mississippi, United States. The population was 1,873 at the 2010 census, down from 2,414 in 2000. Located in an agricultural area, the city had a stop on the Yazoo and Mississippi Valley Railroad, which carried many migrants north out of the area in the first half of the 20th century. 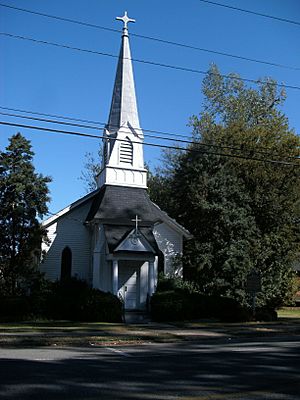 Grace Episcopal Church in Rosedale is listed on the National Register of Historic Places. 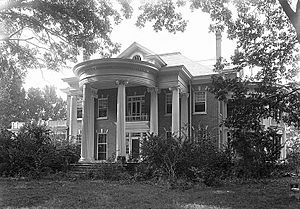 The A. Y. Scott Residence in Rosedale, 1920. Scott was a director of the Rosedale Oil Mill.

This area in the nineteenth century was developed by European American planters for extensive cotton plantations, dependent on enslaved laborers. After the Civil War and emancipation, some freedmen managed to clear and buy land in the bottomlands, with many becoming landowners before the end of the nineteenth century. By 1910, a lengthy recession and declining economic and political conditions resulted in most blacks in the state losing their land. They could not compete with the financing gained by railroads, which were constructed in the area beginning in 1882 Many stayed in the area to work as sharecroppers and laborers. The railroad brought new business to Rosedale, which had a depot and shipped cotton to northern and other markets.

Beginning in the early twentieth century, tens of thousands of blacks left the state of Mississippi as part of the Great Migration, north by railroad to Chicago and other Midwestern industrial cities. During and after World War II, others went to California to work in the defense industry. Others remained where their families had lived for generations, with strong local ties.

In 2007, the Mississippi Blues Commission placed a historic marker at Rosedale's former Yazoo and Mississippi Valley Railroad depot site, designating it as a site on the Mississippi Blues Trail. The marker commemorates the sites in the original lyrics of legendary blues artist Robert Johnson's song "Travelling Riverside Blues". He traced the railway route which ran south from Friars Point to Rosedale among other stops, including Vicksburg and north to Memphis. The marker emphasizes that a common theme of blues songs was riding on the railroad, which was seen as a metaphor for travel and escape from poverty and Jim Crow in the Delta.

Locals claim that Johnson sold his soul to the Devil at the intersection of Mississippi state highways 1 and 8, on the south end of town, and that he tells this story metaphorically in "Cross Road Blues." Other artists have referred to his songs. Johnson's deal with the Devil is mentioned as occurring in Rosedale in 1930 in an episode of the TV series Supernatural. However, a number of other Delta municipalities claim that the transaction took place in or near their boundaries. 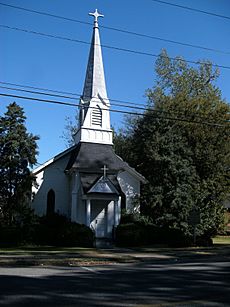 Grace Episcopal Church in Rosedale is listed on the National Register of Historic Places.

There were 780 households, out of which 38.1% had children under the age of 18 living with them, 29.2% were married couples living together, 37.8% had a female householder with no husband present, and 27.3% were non-families. 24.5% of all households were made up of individuals, and 11.4% had someone living alone who was 65 years of age or older. The average household size was 2.99 and the average family size was 3.56.

In 2010, Rosedale had the 22nd-lowest median household income of all places in the United States with a population over 1,000.

All content from Kiddle encyclopedia articles (including the article images and facts) can be freely used under Attribution-ShareAlike license, unless stated otherwise. Cite this article:
Rosedale, Mississippi Facts for Kids. Kiddle Encyclopedia.